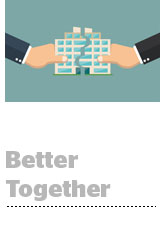 Taboola and Outbrain, the two largest content recommendation companies, are closing in on a merger, according to Israeli news outlet Calcalist. The synergies make sense (the companies are direct competitors with non-duplicate customers) and the merger would create an undisputed heavyweight in the category. The companies’ combined valuation is rumored to be around $1 billion, though each company has claimed to be worth that amount in separate funding rounds. With about $350 million in combined investments, Taboola and Outbrain need a solution for the falloff in demand for sourced traffic. Whether they merge or not, they’re in the same boat. More at TechCrunch.

Google Home’s ability to recognize voices and thus support multiple accounts could have big implications for brands. Users can only add accounts to their Google Home through separate smartphone logins, allowing the speaker to understand identity and tie it to the user’s Google accounts. Down the road, the voice recognition technology could tie queries to individual search histories to suggest the most relevant paid placement based on who is interacting with the device. That means Google can offer personalized paid results down to the individual level on the same device. “Inherently, when information needs are commercial, you are connecting users with people who provide services,” said Google CEO Sundar Pichai. “I think there are natural opportunities.” More at Fast Company.

Oath, the combined Yahoo-AOL entity, has announced its leadership team under parent company Verizon. Tim Mahlman, former AOL president and Yahoo exec, will head up advertising technology and be tasked with converging the giants’ legacy internet stacks. Yahoo engineering vet Atte Lahtiranta will head up tech, Verizon’s Ralf Jacob will lead digital media efforts and Yahoo exec Jeff Bonforte will lead data and search. “We are leaning into a leadership team that is technically enabled,” wrote Tim Armstrong, the former AOL CEO who will lead the new business, in a note to employees. “The executive team is expected to drive technology, data, and platforms into all areas of our operations.” More at CNBC.

Facebook doesn’t want its creators getting ripped off when other people pirate their videos. A new version of Rights Manager, Facebook’s piracy detection software, will allow creators to make money from mid-roll ads that play during pirated video. Facebook has been pushing its video agenda for a while now, and the opportunity to monetize will hopefully attract premium creators to its platform – possibly from YouTube, which has a similar offer for its own creators. More at Recode.