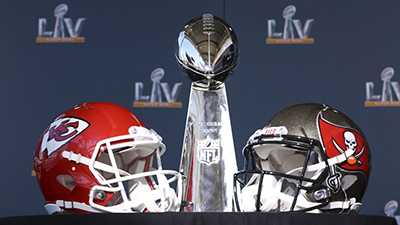 Super Bowl LV will look pretty different on and off the field when the Kansas City Chiefs and Tampa Bay Buccaneers square off Sunday.

While 186.6 million people are expected to tune in this year, according to the National Retail Federation, the COVID-19 pandemic is also playing a big role in how advertisers are adjusting their strategies to target and engage with viewers digitally.

Some advertisers are avoiding the game altogether, such as Budweiser, which will not be running a commercial for the first time in 37 years and instead use the marketing dollars to support Covid-19 vaccine awareness and access.

So how have changing consumption patterns transformed Super Bowl advertising and activations over the past year?


Some advertisers just don’t want to spend $5.5 million for 30 seconds of ad time that isn’t a sure bet to be effective.

“Instead of just airing a 30 second ad that would be talked about for a week or so, they’ve been able to build out a marketing program that not only does good but is a larger conversation outside of the game itself,” said Ellen Ferrari EVP, head of business at Dentsu.

Somber ads are out

Some Super Bowl advertisers who are steering clear of the pandemic in their ads during the game could also benefit.

“There’s probably space for both,” Ferrari said. “By not addressing it, the consumers know what the situation is and they turn to sports and entertainment to get away from the realities of life, so having commercials that are based in more serious tones, if you don’t do it right, there could definitely be some backlash. I think people use entertainment to escape at this point.”

Advertisers that benefited from pandemic habits are testing the Super Bowl

Ad sales have been slower than past years as brands hesitate to commit during the down economy, said Jim Nail, a principal analyst at Forrester. Still, the game is attracting new advertisers, such as Fiverr, a platform for freelance workers, that “fits well with the reality that we are all working remotely all the time.”

“It will be interesting to see how closely they tie their messaging to the pandemic,” Nail said.

Matt Sweeney, GroupM’s chief investment officer, said that the number of people watching NFL games on streaming services and devices is up 30% YOY.

“The real interesting thing is how the market has been leveraging digital platforms to hype and tease and promote their content, their advertising,” he said.

According to FOX Sports, 3.4 million streamed the game across FOX, NFL and Verizon digital platforms last year, the most live-streamed Super Bowl ever.

Tal Chalozin, co-founder and CTO of CTV and video advertising platform Innovid, said that the number of streaming viewers is expected to spike dramatically during this year’s broadcast on CBS, and more people are expected to watch the pre-game at home, with fewer people tuning in at bars and restaurants.

“There are way more Roku’s, Apple TV’s and Amazon Fire’s out there, and the Super Bowl is available for streaming freely and you don’t need any cable subscription and there’s many ways to watch it, mainly using the CBS Sports App,” he said. “As people are cutting the cord it’s pretty easy to watch the Super Bowl in an OTT environment.”

Nail, however, said that while there may be a bump in streaming viewership this year, it has had a very limited impact on the Super Bowl so far, which, while growing, only accounts for less than 5% of the total viewing audience.

As a result, marketers are getting more creative by taking an “experience-based” approach, such as Coors’ “Big Game Dream” campaign, Uber Eats’ YouTube blitz featuring the “Wayne’s World” characters and Cardi B to support local restaurants, and Volvo giving away $2 million worth of vehicles through its #VolvoSafety campaign on Twitter if the Buccaneers or Chiefs score a safety.

“With streaming and platform-based you have the ability to not only measure interaction but build out experiences that can be more meaningful than just a 30 second ad on television,” Ferrari said. “I think it’s those experience-based marketing tactics that are where the pivot is this year versus just the traditional 30 second advertising.”