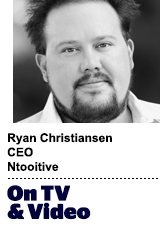 Today’s column is written by Ryan Christiansen, co-founder and CEO at Ntooitive Digital.

The ability to track and effectively target consumer actions has never been more essential to marketers seeking to unleash the power of cross-platform digital advertising. With companies feverishly looking to build or expand video services, the battle to own the future of TV is escalating for media players yearning to take advantage of valuable audience data.

Costco Wholesale is reportedly considering a video streaming service as a perk for its “executive” customers, and Walmart, Kroger, Albertsons and Target are also signaling their desire to get into the media and advertising business.

As digital media companies, retailers and TV networks look to claw back advertising dollars and redirect consumer attention, it should come as no surprise that even venerable grocers are feeling the pressure to deliver digital, on-demand media to compete for market share with the likes of CBS, Facebook, Disney, AT&T, Netflix, Amazon and Apple.

In a broader sense, grocers should want to understand the role subscription video on-demand plays in driving return on investment. If Costco can link ad exposure to purchases through advanced attribution technology, those data points very quickly become drivers that allow for measurable business outcomes and cost savings.

And as the industry innovates to count TV viewers in a way advertisers will support, obtaining more granular measures of data will inevitably give brick-and-mortar outlets leverage to seek premiums from sponsors or ad partners. That’s a business strategy that’s worked extremely well for Amazon because of the large amount of shopper data the company has stockpiled.

When considered alongside Walmart, a brand like Costco testing the waters of the streaming video market doesn’t sound so outlandish after all.

Last month, Walmart made two significant moves with respect to its nascent yet budding entertainment ecosystem. First, the company revealed it would be taking a crack at original entertainment by beginning to offer content through a partnership with MGM. Next, a plan was announced to roll out “shoppable” video ad format programming that would direct viewers back to Walmart.com.

While the size of Walmart’s investment is unknown, I can’t help but wonder if at some point a studio churning out dozens of new original video series is in the retail giant’s future.

An omnichannel look at TV

Incorporating connected TV (CTV) into existing digital omnichannel strategies is intriguing for marketers looking to leverage the largest screen and advertising format inside the home. At the same time, marketers can make their digital targeting more effective when placing CTV buys.

As more OTT options crop up, and brands make strategic decisions to keep pace with consumer demand, marketers have a massive opportunity to tap into insights that reveal the “why” driving individual shopping behavior. What was once impossible – effective measurement and reporting, audience targeting and retargeting and knowing how many times, where and on which devices an ad was viewed – is now a reality.

There are ample reasons to be excited as major players figure out where they fit into the larger picture of the evolving digital landscape. Decades ago, HBO was in the position that Amazon and Netflix are in now: shaking up the advertising-driven television business. Today, the tables have turned and HBO, like many other brands hoping to prolong their lifespans, has found that it must adjust its digital strategy to compete against well-funded digital upstarts.