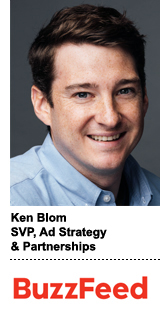 Here’s a little good news from the publishing world for a change: BuzzFeed will restore staff salaries this month and end a program that cut union members’ schedules and pay by 20%.

In late March, BuzzFeed was one of the first publishers to announce pandemic-related cost-cutting measures with tiered 5% to 25% salary cuts, followed by furloughs and layoffs in May and July.

But advertisers are starting to peek their heads out, and BuzzFeed is ready to welcome them back with open arms and listen to their needs. One request: more flexibility in how deals are done.

For example, the window from RFP to the sale to going live “has shrunk dramatically,” said Ken Blom, BuzzFeed’s SVP of ad strategy and partnerships.

A process that once took as long as five months is now being done in a matter of weeks.

“A lot of what we’ve done and are doing is about trying to read and predict the marketplace,” Blom said. “We all try to be good at that, but it’s been incredibly challenging to see through to what may happen next.”

AdExchanger: What happened to ad demand in March?

KEN BLOM: First, we made adjustments related to our opex [operating expanses]. For example, we moved very quickly with the salary reductions. We knew this was something we had to do, although we didn’t know if it would be for as long as it was.

We also had a lot of advertisers taking stock of their own opex, and we realized that to say to them, “You owe us this money right now, because you signed a deal” – that didn’t seem right. And so we became extremely flexible as a partner. This is something we’ve heard across the industry – the need for greater understanding about cancellation policies.

How did you woo advertisers back?

During quarantine, there were many more people spending time on BuzzFeed.com or on YouTube watching our videos. We had more inventory and demand, but at the same time, advertisers were cutting budgets and trying to figure out what they should do. Coming to them and saying, “Hey, our traffic is up – want to buy some ads?” was not the right strategy. We toed the line very gently here.

We didn’t focus on our traffic and volume. Instead, we talked with advertisers about what people have been consuming on BuzzFeed so we could help them craft their ads. How are people coping with the challenges of back-to-school, for example, and how can BuzzFeed help parents through this time vs. telling them to “buy this new school outfit.”

Have you been able to attract new advertisers?

Entertainment and travel were hit hard, as everyone knows, but we did see a shift to digital commerce, utilities and also certain players that were new to our portfolio. All of a sudden you’ve got Zoom, Facebook, Google and Houseparty all competing using video advertising, and the same is true for home delivery apps, plus other DTC advertisers that we probably weren’t even calling on before.

We reframed and restructured our sales organization as we learned about what advertisers would be willing to buy vs. not, which allowed the sales org to focus on both new clients and more legacy or traditional clients that need our help in the shift to digital.

How has the sales cycle changed?

It used to take between three and five months to go from planning to live, and now it’s, “Here’s the RFP, get back to us today, we’ll let you know in a week,” and then we go live two weeks later.

Doing that creates operational strain, but we’re here for it. We know we need to move quickly to meet the marketplace and what they’re asking for.

Is it too optimistic to say that ad spending is on its way toward returning to normal?

We do see advertisers returning to spending mode again and we know what to say to them. We know they want more turnkey products and that they’re focused on ROI. But the environment has changed, and the way we work with advertisers has changed too. We don’t know what will happen next, where the numbers will be or what the election will mean for advertising spend.

Is any of this normal? No. But I can say that we’ve certainly gotten very used to certain things that I think will stick around, including more flexibility, being more nimble and driving true utility for users.

How are advertisers thinking about brand safety as they come back on board?

We’re trying to show advertisers the importance of certain audiences, like people who consume content related to the BLM movement, and explaining to advertisers why they shouldn’t use negative keywords to block that content or content related to COVID-19, for example. These are actually audiences that advertisers should be catering their message to. We’ve seen some uptick in the conversations we’re having with advertisers to flip that dynamic. It’s something we’re going to make sure we continue pushing.

If you have a human-to-human conversation with a CMO, they get it, but when it comes down to the programmatic levers actually being pulled, you often end up with negative keywords.

Programmatic is great, but if it starts to lose the human element, we’ll become dissociated from the content we’re creating.