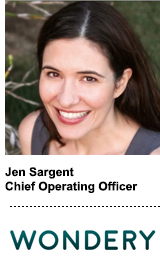 Consumers might be willing to pay for Netflix, Disney Plus and Amazon Prime to watch TV, but they’re not as open to shelling out bucks for subscription podcast apps.

Although some podcasts are able to drum up their own subs, most podcasts are distributed freely, and a majority of listeners in the United States use Apple’s built-in app on iPhones or streaming services, such as Spotify, to listen to their favorite shows.

Podcast production network Wondery, however, home to hits including “Dirty John” and “Doctor Death,” thinks it’s got enough exciting, exclusive content that people will be willing to use – and even pay for – a dedicated listening app.

“We want to super serve our most passionate fans and bring that Hollywood-style storytelling experience into the app,” said Wondery Chief Operating Officer Jen Sargent.

Wondery Plus, which launched in July, is a freemium service available on iOS and Android that provides access to around 12,000 episodes of Wondery content. The ad-supported version is free or listeners can pay $4.99 per month ($34.99 annually) for an ads-free experience and get exclusive content and early access to shows. Also available with a subscription is a feature called binge mode by which Wondery Plus releases all of the episodes in a series at the same time, rather than weekly.

Much of Wondery’s content involves serialized storytelling, and hardcore fans are willing to pay to binge a season all at once, Sargent said.

“General market apps, while quite good, didn’t do our content justice or present it in a way that was easy to find or binge,” she said.

Launching an app also gives Wondery a direct connection to listeners. Podcast publishers – and by extension, advertisers – are often in the dark about how content and ads are performing on third-party distribution platforms.

“Having an app allows us to better understand listeners and serve them better,” Sargent said. “There will eventually be an opportunity to give clients a richer understanding of how the audience is behaving and get better attribution for our shows.”

Sargent declined to share user numbers but noted that Wondery Plus subscribers are doubling on a weekly or biweekly basis and that 40% of free listeners eventually end up subscribing.

AdExchanger: Subscription podcast apps are a tough sell. Why is now the right time to launch this?

We’re coming up on our five-year anniversary in January. We have an established brand name and enough content for our customers to support a subscription business. We have a strong pipeline and enough of an audience to draw on to go to market.

I think that we can coexist with [a platform such as] Spotify. They’ve been a great partner and will continue to be. This is a curated experience for Wondery content. It’s like Disney Plus living side by side with Netflix. Spotify’s app is optimized for Spotify’s content. Wondery Plus is catered to Wondery listeners.

What can listeners find on Wondery Plus?

The majority of the content is our originals. We’re hearing from listeners that not only does it seem to be enough content, but they’re really enjoying the experience.

The navigation and UI are more like a TV-streaming app than a podcast app. Below the hero is content based on your listening behavior. You can continue listening, easily see new episodes of shows you like, and it’s easy to get to passion points like true crime, comedy or sports.

Are you making any shows exclusive to drive subscriptions?

We are not right now, but in some cases we’re making Wondery Plus the only place certain shows are ad-free.

Ultimately, we will need some content exclusively behind the Wondery paywall. Subscribers that don’t want to wait a week will either get early access or binge access to our miniseries.

But most of our content is going to be available [both] ad-supported and behind the paywall.

Will you continue to distribute Wondery shows on other podcast platforms?

It’s important to distribute on many platforms. We don’t expect most listening to be through Wondery Plus. But we have an opportunity to super serve our fan base, learn more about our listeners and get added benefits that we can’t on third-party platforms.

How does Wondery Plus relate to your TV strategy?

We’re seeing Wondery content move into other forms of media. We have 16 projects optioned for TV. Four have been ordered to series. We’re seeing the lines blur on where stories originate.

Production is coming back this fall, so we’ll be putting shows in market as early as fall 2021. We’re interested in bringing more underserved content and different voices to the table, such as educational content for kids or meditation podcasts.

What are your growth plans for Wondery Plus?

Outside the United States, podcasting is supported more by direct monetization, such as tipping hosts, paying for different access or ecommerce. Some of that will make its way to the United States.