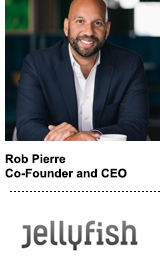 Financial terms of the deals were not disclosed, though Jellyfish Co-founder and CEO Rob Pierre told AdExchanger that most were closed in early January with a mix of cash and stock. Three of the brands – content company Quill, Amazon consultancy Seelk and data strategist Webedia – were cash deals and acquired from French investment group Fimalac, which purchased a majority stake in Jellfyish in 2019.

“When [Fimalac] acquired us, it became apparent when they looked at our infrastructure and how we were integrating companies, they basically said any company within the Fimalac group that is around marketing and communication, they need to go – they need to be homed in Jellyfish,” Pierre said. “That happened quicker than we expected. The others go a little bit longer – the due diligence takes a bit longer.”

The acquisitions will bring about 600 employees into Jellyfish, and the companies will be fully integrated into the company’s software channels this year. Some of the products will sit within Jellyfish’s larger “vertical wrappers.”

For example, Quill’s network of 7,000 content creators allows Jellyfish to help global brands scale content designed to drive performance. Or if Google launches a campaign, Jellyfish can repurpose the creative generated by localization company Splash for every single market.

The sum of these companies, Pierre said, let Jellyfish support global brands despite the fragmentation caused by digital.

For instance, the new functionality can help brands avoid posting the same content on Amazon, Facebook shop pages and their own websites and product feeds.

“If you have different … routes of that content, it doesn’t look like duplicate content and it performs better in each of the algorithms and each of the walled gardens,” Pierre said.

Jellyfish, which was founded in the UK in 2005, has 2,000 employees and 40 offices around the globe. Clients include Samsung, Uber, Nestle, Orange, Spotify and eBay, and Jellyfish is one of a select few globally managed Google Marketing Partners. The company has grown over the better part of the last decade by more than 800 employees and 28 global offices.

Jellyfish acquired Latin American digital media companies Reamp and San Pancho to further expand its presence in the region last year. The acquisition of Data Runs Deep in Australia, Pierre said, marks the final strategic market for Jellyfish, although the company is eyeing a potential move into China.

“Other than that, we’re in all the strategic markets,” Pierre said, adding that the company still has plans to further expand, which could include additional M&A deals. “We’re now looking at what our options are to button down China as well.”