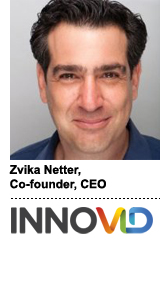 Following approval by the Securities and Exchange Commision, the merger with ION Acquisition Corp. 2 would put Innovid’s total value at $1.3 billion. Plus, it allows Innovid to raise $403 million. The SPAC merger is expected to close in Q4.

The rise in streaming has fueled Innovid’s growth.

Connected TV accounts for nearly half of Innovid’s TV advertising business. During the past year, CTV grew 70% on the platform.

Going public makes the company more transparent, which will help win over prospective clients. Innovid plans to release its financials on Thursday after filing an S-4 with the SEC.

“The company was profitable and we always knew we wanted to go public, rather than sell the company,” Netter said. “There was a lot of uncertainty last year and we couldn’t get ready for an IPO because we weren’t sure what was going to happen – 2020 ended extremely well for connected TV.”

The New York-based company – which had closed its most recent funding round in 2019 with $30 million from Goldman Sachs and raised a total of $91 million since launching in 2008 – was approached by several SPACs earlier this year.

The company ultimately chose Israel-based ION Acquisition Corp., which had submitted the lowest offer, but was selected based in part on its SPAC merger with another ad tech company, Taboola, in January. Innovid and Taboola would operate as separate companies under the ION umbrella.

“We’re growing extremely fast and this is certainly a quicker way for us to go public,” Netter said. “This will give more visibility into who we are, what we do and hopefully also increase the level of trust among some of the world’s largest advertisers and brands.”

With the proceeds from the transaction, Innovid will invest $23 million in CTV research and development.

“CTV is taking off, not just in the US, and we’re starting to see acceleration in Europe, in Asia,” he said. “We want to support our clients on a global scale.”

The company works with include Roku, Hulu and NBCUniversal’s Peacock, among others. Netter said that going public would allow Innovid to maintain its status as an independent ad server and neutral software platform, which he cited as one of the company’s key differentiators.

“We don’t have a media business – we’re not buying, we’re not selling,” he said. “We don’t take a percentage of the media spend, we charge software fees.”

In addition to Taboola, Innovid joins a ballooning list of companies such as IronSource that are using SPACs as a vehicle to go public.

Ad tech IPOs overall are experiencing a resurgence, particularly with the rise of CTV, and a number of companies have gone public in recent months, including AcuityAds, AppLovin, DoubleVerify, Pubmatic, Viant and Zeta Global.

Asked whether he foresees a bubble, Netter cited Innovid’s profitability and its work with more than 40% of the top 200 US TV advertisers. He declined to disclose Innovid’s total number of clients.