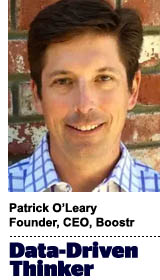 Today’s column is written by Patrick O’Leary, CEO at Boostr.

If last year was any indication, 2021 is going to be the year of the SPAC for digital publishers. SPACs – or Special Purpose Acquisition Companies – are “blank check” investment instruments used to take companies public without passing through the traditional IPO process. This formerly little-used tool is gaining popularity across the investor ecosystem and is a particular draw for digital media and ad tech players who have typically struggled to break into the public markets.

Just last month, content syndication giant Taboola took itself public with a SPAC and a valuation of $2.6 billion. Later this year, Group Nine Media will take the same path, having already taken its own SPAC public on January 15th. Further, Buzzfeed is considering a similar move, and a number of media-focused investors are raising money for SPACs which puts much of the digital media landscape in play.

With all this activity, two questions remain: Why is the SPAC boom happening now? And what does the rise of SPAC IPOs mean for the digital media ecosystem?

The timing is right

The simple answer is that there’s pent-up demand among media investors. The digital publishing and ad tech boom that began over a decade ago hasn’t produced many of the big exits that early investors expected, and the public markets haven’t been particularly welcoming to digital media ventures. SPACs provide an exit for early investors and allow companies with strong brands and businesses to enter the public market without the wilting scrutiny of a traditional IPO. Add to that the role COVID-19 has played in accelerating digital transformation, and many investors see this as a unique time of unparalleled opportunity.


There’s been a significant amount of consolidation in digital publishing and ad tech, particularly among companies with $25-75 million in revenue, often considered the IPO sweet spot. With rapid consolidation and a dwindling number of large strategic acquirers left on the field, SPACs provide an alternative to endless rounds of venture capital and a way to circumnavigate the skepticism about the digital media sector.

SPACs also offer a faster and more efficient path to going public. A traditional IPO involves considerable regulatory and financial hurdles, along with a great deal of public scrutiny and review. These practices can slow down the IPO process, a difficult pill to swallow for digital media players who are accustomed to reinventing big pieces of their business at regular intervals as conditions in the ecosystem change.

This adaptability is usually a strength, but it can create frustration during a traditional IPO process designed for less dynamic businesses. While a traditional IPO can unfold over several years, recent SPAC IPOs have been executed within a few months. This speed makes them more appealing to business leaders in the fast-changing digital media space, especially those looking to quickly raise money to accomplish specific goals.

Finally, going public through a SPAC gives publishers more control over the terms of their public offering. Company management is able to negotiate the exact terms of the purchase, eliminating the price uncertainty that makes traditional IPOs such a gamble. While the valuation may be lower than what a company might otherwise receive, the ability to control price creates a level of stability and predictability for employees and long-term investors that isn’t otherwise possible.

SPAC IPOs are not without their drawbacks. If you want to build the next Condé Nast or Disney, going public may be a critical step that allows you to raise money to finance the kind of growth that a world-class media business requires. However, it also means opening your books to investors on a quarterly basis and being more responsive to shareholder needs and growth targets. For many digital media entrepreneurs who are used to the long horizon of private companies, ensuring consistent short-term results and a high stock price will be an adjustment.

Also, nothing in this world is free. The expediency of a SPAC IPO comes at a cost. Paying out early investors means taking on new ones who don’t know your business as well. Going public means meeting obligations to shareholders and being responsible to a board, sometimes composed of new members with different ideas. Fortunately, many of these concerns can be managed ahead of time in the structuring of the SPAC acquisition.

Finally, while now looks like an opportune time to go public as investors are responding favorably to SPAC offerings, there’s a reason many companies are waiting longer to go public today than during the dot com boom of the 90s. While many digital publishers have waited a long time to go public, others may find that it’s too soon even if the added cash holds appeal for investors and equity-holding staff members. Going public too early can create long-term problems for businesses that aren’t ready for the responsibilities that come with being a public company.

While the SPAC boom is in its early days, a few things are already clear. For the first generation of digital-native publishers – like BuzzFeed, Vice, and Vox – SPACs may offer a long-awaited exit opportunity for media brands that have become household names without ever breaking through to the public markets. The same may be true of the ad tech sector which, in many ways, has charted a parallel course alongside digital publishers only to likewise be shut out of the public markets by investor skepticism about the industry.

What remains to be seen is how these newly public digital publishers and potential ad partners will behave and how their obligations to the markets may shape their trajectory going forward. Going public means curtailing some of the big dramatic strategy pivots that have defined digital publishing and advertising technology industries over the last decade in favor of creating predictable, stable, recurring revenue results. If most major players in the digital media space take themselves public in the coming months and years, it’s likely to reshape the way the entire digital ecosystem operates in unexpected ways.