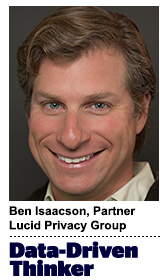 By now, you should be well aware of Apple’s imminent changes to its App Store terms that will require consent for ‘Tracking’ iOS users across apps and websites, kicking off with the release iOS14.5 in the next month—or so.  (Apple hasn’t confirmed a release date, but their reference to ‘Spring’ and prior history of releases within a month of their beta release indicates a March release date.)

While the advertising and marketing industry is well-versed in getting consent for cookies and email marketing, Apple’s approach attempts to go beyond consent exclusively for their device-specific Identifier for Advertisers (IDFA) to include any data collected or associated with an iOS device, including registered user email addresses. For the first time in the marketing industry, a technology platform is attempting to apply its own self-regulatory privacy principles to the entire world.

The new challenge for marketers is defining where Apple’s policies end, and their own data rights begin. It should be clear that retargeting an iOS app user with interest-based ads on another iOS app by using a hashed email address or phone number will be restricted without Apple’s ATT consent, but there are many additional scenarios to consider based on Apple’s ‘AppTrackingTransparency Framework (ATT)’ policy language and FAQs, including:

Another key aspect of Apple’s policy is their update to the SKAdnetwork, which effectively forces all publishers and ad networks to share ad respondent data with Apple to ‘anonymize’ so advertisers or their MMPs can’t uniquely attribute individual behaviors. While Apple’s intention may be a privacy best practice, it will challenge advertisers’ ability  to identify fraudulent ad campaigns, such as the tactics insinuated in the Uber vs Phunware lawsuit. Besides making it harder for advertisers to identify fraud, Apple has ‘doubled down’ on its restriction around device fingerprinting, stating “you may not derive data from a device for the purpose of uniquely identifying it. Examples of user or device data include, but are not limited to: properties of a user’s web browser and its configuration, the user’s device and its configuration, the user’s location, or the user’s network connection. Apps referencing SDKs, including but not limited to Ad Networks, Attribution services, and Analytics, that are found to be engaging in this practice may be rejected from the App Store.”  In other words, even if an advertiser or app attempts to identify and aggregate device-specific data exclusively to identify fraud, Apple may still reject that app (and its MMP) from the app store.

And finally… the consent conflict.

As we know from compliance with Europe’s General Data Protection Regulation (GDPR), the optimal approach for marketers to acquire consent from users is to  establish four “consent pillars”:

After grappling with this EU requirement for the past few years, websites have finally reached consensus on acquiring this level of consent for cookies, and we now see this same cookie consent extended to global website visitors. Surely, if this optimal EU-compliant consent were extended through iOS apps to their registered users for “Tracking” email addresses or other identifiers independently of the ATT, Apple would align with this approach?  Unfortunately, Apple has only offered some tangential statements such as this FAQ:

“If a user provides permission for tracking via a separate process on our website, but declines permission in the app tracking transparency prompt, can I track that user across apps and websites owned by other companies?

Developers must get permission via the app tracking transparency prompt for data collected in the app and used for tracking. Data collected separately, outside of the app and not related to the app is not in scope.”

From this and other published statements, we can derive many important legal, privacy and compliance questions:

On this last point, I would be remiss not to point out that the Interactive Advertising Bureau (IAB) in France has filed a formal complaint against Apple due, in part, to its ATT consent approach not being compliant with the GDPR. Perhaps if Apple enabled consent management platforms (CMPs) to manage the ATT on behalf of apps, then they wouldn’t find themselves responding to the IAB’s complaint and the many other questions presented in this article.