Can Comcast’s Blockgraph Bring Data Matching And Crypto Tech To TV? The Tool Brands Are Using To Get Directly Into An Online Retailer’s Cart Comcast Doubles Down On Ad-Supported Streaming With Deal For Xumo Here’s How NBCU’s Solution To Unite Its Linear And Digital Inventory Will Work Tips For The New Regulation Age: How To Curate And Ethically Use Data To Build Consumer Trust Why Every Ad Tech Company Must Understand Differential Privacy Moving A $20 Billion Market: How Local TV Is Fighting To Evolve Brand Velocity Partners Combines PE Investments With … An Ad Agency Ofer Druker On Tremor Video’s Plan To Buy Scale And Share In Ad Tech
» 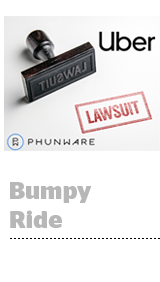 “Guys, it’s that time of the month … no not that time. It’s time to spin some more BS to Uber to keep the lights on.”

That’s an excerpt from an email sent on Oct. 31, 2016 between two employees at Phunware, according to a lawsuit filed by Uber on July 12 in San Francisco. Uber is suing the ad network for, it claims, facilitating and covering up a multiyear ad fraud scheme that cost the ride-sharing app $17 million in ad spend.

These details, and others, were recently un-redacted from a suit, filed on July 12 in the Superior Court of San Francisco. Uber’s cross-complaint accuses Phunware CEO and co-founder Alan Knitowski, and several other named defendants, of federal criminal wire fraud, racketeering, transporting fraudulently obtained funds across state lines and common law fraud.

According to the suit, Phunware, a public company, is one of many third-party ad networks hired in 2015 by Uber’s former agency, Dentsu-owned Fetch, to help Uber generate app installs.

The relationship soured, and Uber sued Fetch in 2017 for supposedly buying fake traffic and taking credit for app installs it didn’t drive. Phunware, and later Fetch, each separately sued Uber over unpaid invoices. Uber eventually dropped its suit against Fetch.

Uber has been on the warpath since it first sued Fetch. In June of this year, Uber filed a suit against five other networks that Fetch had used on the Uber account – Hydrane SAS, BidMotion, Taptica, YouAppi and AdAction Interactive – for allegedly buying nonexistent ads and junk traffic.

The suit claims the scheme netted the defendants $17 million from Uber.

The complaint further claims Phunware employees concealed their activities by avoiding company email and communicating through “ephemeral messaging applications,” face-to-face or by paying “certain networks” not to reveal the actual placement of Uber ads. This concealment happened, the complaint alleges, under CEO Knitowski’s direction.

A recently unredacted portion of the suit claims that Knitowski would get upset if employees didn’t use ephemeral message because he “wanted to maintain plausible deniability when executives had discussions about certain aspects of the fraud.”

After Uber grew suspicious of Phunware’s activity in 2016, two unnamed Phunware employees conducted an internal investigation, the suit claims. It goes on to say those two staffers found that “most of” the Uber app installs attributed to Phunware were fraudulent, generated via a process called click flooding.

Their investigation also allegedly found that Phunware bought fake ad placements, using auto-redirects that went from blacklisted sites to the app stores and lying about where ads ran in faked transparency reports to trick Uber into believing that the installs were legit.

Most of the traffic that Phunware bought for Uber allegedly came via auto-redirects that would automatically shunt users directly to an app store without them clicking on an ad or taking any other conscious action.

To top it all off, Uber also claims that Phunware pocketed kickbacks and volume rebates from media buys that it was supposed to turn over to Uber.

All of these tactics were prohibited in Uber’s contractual agreement with Fetch, according to the suit.

But Phunware is also accused of employing a few even shadier methods.

For example, Uber says that Phunware wrote scripts to falsify where ads were running that would insert a fake app name at random from a pre-populated list of publishers. Uber further claims Phunware hardcoded the names of dozens of apps into TUNE, Uber’s attribution partner, to mask when ads were running on prohibited sites.

The claim also asserts that Phunware, at Knitowski’s behest, paid “large sums” of cash, the equivalent of hush money, to blacklisted publishers for keeping quiet about Phunware’s scheme.

That same employee who remains anonymous in the suit spoke with Knitowski about the ongoing fraud on multiple occasions, the suit claims, adding that during one of those conversations, the employee expressed concerns to Knitowski and said that it was time to stop.

To which Knitowski allegedly responded: That “would be professional suicide.”

Phunware and TUNE both declined to comment on pending legal matters.