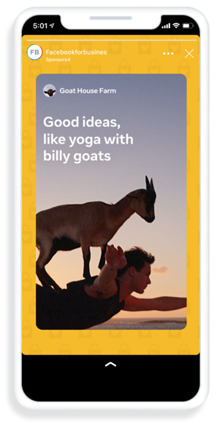 Here’s something meta for you: Facebook is running a targeted ad campaign to promote the importance of … targeted advertising.

On Thursday, Facebook launched a national push that aims to demonstrate the value of personalized ads, especially for small businesses reeling from the ongoing pandemic.

The campaign, under the title “Good Ideas Deserve To Be Found,” will run across TV, radio and online digital channels, including on Facebook and Instagram, through the spring in the US. The TV spot will air across a bunch of different networks and shows, starting with Good Morning America, World News Tonight, Young Sheldon CBS, NCAA basketball and during the Golden Globes.

The purpose of the campaign is to highlight small businesses that have used personalized ads on Facebook and Instagram to find their audiences and grow their business, like Goat House Farm, a micro-farm in Florida that offers goat yoga classes.

Not addressed is the fact that organic reach on Facebook has been on the decline for years.

Although the context for this campaign is obviously related to Facebook’s ongoing war with Apple over the latter’s impending privacy changes on iOS 14, Andrew Stirk, Facebook’s head of brand strategy, demurs that this is the only reason behind the effort.

“We’re on record as a company saying we disagree with Apple’s position, but this initiative is part of much longer-term support for small businesses which extends far beyond personalized advertising.”

“Many millions, in fact the majority of small businesses, on our platform, use all of our free tools,” said Stirk, who leads the team that developed the campaign. “But there is a degree of urgency and that urgency is driven by the fact that small businesses are hurting right now.”

According to a recent Facebook survey of small businesses, 47% say they’re not sure if they’ll be able to survive the next six months.

Beyond the campaign, Facebook is also rolling out a few small business-related product updates, including making Ads Manager simpler to use and redesigning the dashboard that people see when they log in to show a quick snapshot of their campaign performance.

Facebook is also adding a new feature that allows restaurants to call out which types of dining experiences they have available, and to upload menus directly to their Pages.

On top of that, Facebook said it will continue to waive all transaction fees for businesses using the checkout function in Facebook Shops through June and all fees associated with the paid online events feature at least through August 2021.

When Facebook first announced paid online events in August of last year, it took the opportunity to throw some shade at Apple for refusing to forgo its customary 30% App Store fee on purchases made through Facebook’s app for live paid events. (Apple relented a bit in September by allowing online event fees to be processed via Facebook Pay through Dec. 31, thereby allowing businesses to temporarily avoid the 30% fee. This carveout didn’t apply to gaming creators.)

In terms of Facebook’s SMB-focused product road map for 2021, the main themes will continue to be making it easier for businesses to market themselves and facilitating their shift online.

“COVID has accelerated the trend toward ecommerce,” said Helen Ma, director of app monetization and advertising solutions at Facebook. “If you’re not online … you’d better be now.”