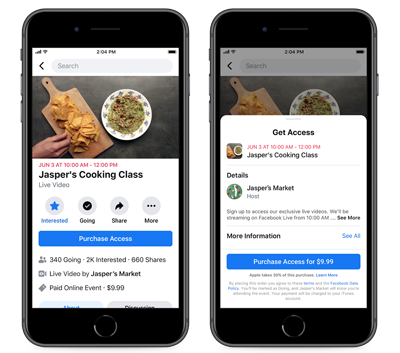 Facebook launched a new feature on Friday that will allow small businesses to promote, host and monetize live online events on its platform – and took aim at Apple in the process.

The paid online events feature, which will initially be available in the United States and 19 other countries, enables anyone with a monetizable Facebook Page to earn money from live events through Facebook Live.

Facebook is testing how its online events offering could work with Messenger Rooms, the Zoom competitor Facebook launched in April.

For the next year at least Facebook will waive any fees associated with paid online events, which means that hosts will be able to keep all of the revenue they generate – but that’s only true on Android and on the web.

According to Facebook, Apple dug in its heels and refused to waive its customary 30% App Store fee or let Facebook offer Facebook Pay as an option, which would allow Facebook to absorb that cost. And so, 30% of all revenue generated by this feature will go to Apple.

… which sounds familiar. On Thursday, Apple booted Fortnite out of the App Store for using its own in-app payment system as a way to circumvent the App Store fee. Epic Games, which owns Fortnite, was clearly expecting Apple’s reaction.

Epic filed a lawsuit against Apple within minutes of the ban and released a video mocking Apple’s iconic “1984” spot, in which Apple plays the role of totalitarian overlord.

Although Facebook has been working on its online paid events feature for a number of months, one has to wonder if it didn’t put the pedal to the metal on this announcement following the recent Fortnite brouhaha.

During a call with reporters on Friday, Fidji Simo, VP and head of the Facebook App, denounced Apple for sticking to its guns, noting that now is the time for “all tech companies that can afford it to do so and join us in supporting small businesses.”

Pages that host events can promote them to their own communities through an event-specific ad unit using all the usual targeting tools available across Facebook.

Facebook is also allowing small businesses to create custom audiences of people who engage with or attend an event for retargeting purposes to promote other parts of their business, Simo said.

The paid online events launch is part of Facebook’s ongoing effort to release products and features that support small businesses during the long cruel spring, summer and coming autumn of COVID-19.

Facebook converted its road map at the beginning of the pandemic to focus more specifically on the needs of struggling SMBs, Simo said.

Other recent SMB-focused rollouts include a $100 million grant program for small businesses affected by the coronavirus economy, with $40 million going to help roughly 10,000 businesses in the U.S. in the form of cash and some ad credits. Facebook also introduced digital gift cards for local businesses and expanded its fundraising tools to give people a way to support SMBs in their communities.