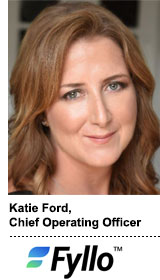 The time was right to fly the nest.

Ford was the first board member of Fyllo, which was founded by her former Amobee colleague Chad Bronstein. She served as chief client officer at Amobee before Twitter.

Fyllo currently employs 120 people, with its headcount slated to double over the next year.

The company has also made two acquisitions since launch: point-of-sale and CRM cannabis company DataOwl this January and CannaRegs, a database of nationwide cannabis regulations, in January 2020. Add in an extra $10 million in funding secured in August, for a total of $26 million, and Ford felt compelled to transition from board member to COO.

One of the business lines that excites Ford the most is Fyllo’s potential as part of the movement to destigmatize cannabis. “There is a profile and stigma of cannabis users, and we’ve debunked that completely,” she said.

The pandemic has only accelerated that process. Ford notes that President Joe Biden has a “pro-cannabis agenda” and that many states are ramping up plans to legalize cannabis as they seek tax revenue lost during the pandemic, making the environment for Fyllo more favorable.

Ensuring client success will be a key part of Ford’s new role at Fyllo. Prior to Amobee and Twitter, she spent 24 years at Publicis working on strategy for big global brands, including Coca-Cola, Miller Coors and Kellogg’s.

“We’re only as good as how we perform,” Ford said. And so making sure Fyllo delivers on ROI for advertisers and educates them about Fyllo’s compliance cloud will be a key part of her mission.

Ford is also working on building culture during a pandemic. Many new employees have never met each other in person.

Next up, Fyllo will continue integrating its DataOwl acquisition and work on developing a product that can offer advertisers and publishers the equivalent of a “Good Housekeeping” seal of approval for compliance, Ford quipped – but for cannabis marketing.