Companies that rely on Apple’s proprietary ad ID are seeking solutions for a post-IDFA world.

Although Apple didn’t actually kill it, the IDFA will become opt-in for consumers starting with iOS 14 in September. Without user permission, IDFA tracking will be zeroed out, just like when Limit Ad Tracking is enabled.

Some are predicting opt-in rates as low as 5%.

A mobile measurement partner (MMP) is an independent third-party that tracks mobile performance and helps attribute installs. An IDFA is necessary to do that on iOS.

For users that don’t opt into tracking, Apple’s API SKAdNetwork passes limited attribution info directly to the ad network when an ad click leads to an install. In other words, no need for the IDFA in that transaction and, according to some, no need for an MMP.

But there is still a meaningful role for MMPs to play in this setup, said Gadi Eliashiv, CEO and co-founder of mobile marketing analytics company Singular, which rolled out support for SKAdNetwork in late June.

Although with SKAdNetwork the App Store acts as the mediation layer between the publisher and the advertiser, ad buyers will still want their installs verified by a neutral party and help with aggregating data across their various ad network partners, Eliashiv said.

Singular is also working on a standard called SKAN for implementing SKAdNetwork in a uniform way across ad networks and MMPs. It’s currently shopping the idea around the companies in the mobile app space. Companies are invited to contribute to and collaborate on the spec.

For others, SKAdNetwork is a nonstarter.

“It’s well intentioned, but sadly doesn’t live up to the needs of our clients,” said Paul Müller, CTO and co-founder of app attribution provider Adjust. “I also don’t think, though, that Apple wants to nuke the whole app ecosystem.”

After all, Müller said, Apple didn’t outright kill the IDFA and even created a few exceptions. For example, Apple will allow companies to track users without obtaining consent and to link that information with third-party data as long as the data is read locally and never leaves the device.

In order to tie an ad click to downstream metrics, Adjust proposes creating a secure hash when a user first opens an advertiser’s app of the person’s IDFA and IDFV, which is an ID associated with vendors in the iOS ecosystem. The hash would never be the same between two apps on the same device (unless the apps belong to the same publishers), and so couldn’t be used for retargeting or profiling purposes.

Adjust can then use the hash to connect ad engagements with subsequent user behavior without the IDFA or the IDFV leaving the user’s device, because both were only used locally to create the hash.

But there’s a catch. The publisher app in which the ad runs still needs an IDFA opt-in for Adjust to connect it with the hash. 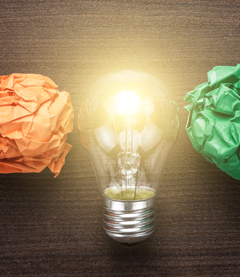 Alex Austin, CEO of deep-linking startup Branch, is far less sanguine. “The IDFA is dead,” he told AdExchanger in a previous interview. “There is no other way to interpret this.”

Branch’s answer is a persona graph that it’s been developing for the past few years, designed to use an “anonymous, probabilistic algorithm that incorporates attributions” to accurately match when there’s no universal ID.

Most of the data comes from Branch deep links in apps, ads, emails and on websites. Branch collects identifiers every time a user clicks on one of the links, and rounds out the graph using machine learning to draw matches between personas that likely belong to the same user.

Branch claims it’ll still be able to provide high coverage rates even without the IDFA and that its graph does not depend on fingerprinting, a practice many believe Apple will start cracking down on in apps.

Advertisers and publishers onboard their first-party data into a secure area (aka, “locker”) hosted by Kochava. Demand and supply partners can then prompt users for consent and manage data permissions within their locker using secure identity tokens. The tokens are resolved through Collective, Kochava’s data marketplace/identity graph of hashed emails, household IDs and other device and user attributes.

It’s unclear whether Apple will frown upon the concept of a token whose sole purpose appears to be as a replacement for the IDFA.

App monetization company Fyber is operating under the assumption that the IDFA is as good as dead and anything that resembles it is dead on arrival.

“What can we tell a DSP in real time about the opportunity rather than about the user?” said Fyber’s president, Offer Yehudai.

But contextual targeting is a whole different ball game in apps compared with on the web, where it’s possible to infer context by reading the text on a page. Fyber is working on a solution that combines app-specific contextual signals and includes them in a bid request to enable targeting that doesn’t hinge on a specific identifier.

Bits of information, such as how much space someone has on their device, battery level, network speed, impression depth – which is whether someone is seeing their first ad impression of the day or the 100th – session duration, time of day and app type can paint a clear picture when blended together. None of the data will be tied to a specific profile.

AppsFlyer is one of the biggest and most penetrated mobile attribution providers in the ecosystem and it’s still in the process of figuring out its post-IDFA strategy.

The company is planning on presenting its iOS 14 solutions soon, according to a blog post last week from CEO and co-founder Oren Kaniel.

In a statement shared with AdExchanger, AppsFlyer said that it “will continue to provide customers with a robust attribution solution that puts the end user’s privacy first” while also maintaining a positive user experience.