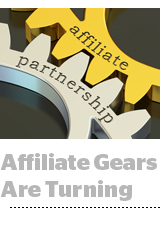 For some marketers, the word “affiliate” has such a reputation for banality, it’s like Voldemort — nobody wants to hear the name, said Button co-founder and CEO Michael Jaconi.

Advertisers could use Evolution to adjust their commissions and pricing based on first-party audience or CRM data, so they don’t have to default to platforms like Google and Facebook where they have more granular controls over targeting, said Bob Glazer, CEO of the affiliate agency Acceleration Partners.

Uber Eats, an Evolution beta partner, used those controls to place higher commissions on lapsed users and other high-value audiences, such as by increasing rates for people who live near restaurants that use the delivery service, while lowering its price for potential users who aren’t served by Uber Eats.

These types of segmentation are common in search, social and programmatic advertising, Glazer said, but affiliate marketers still mostly use a single rate regardless of target audience or publisher context.

After more than a decade of relative stagnation, there’s now “an arms race” for smarter affiliate marketing tech, he said.

That arms race has shown up in recent M&A, such as the retail marketing company Connexity’s deal for SkimLinks, one of the largest independent affiliate networks, in May. The women’s lifestyle publisher Meredith bought the affiliate network and content recommendation company SwearBy earlier this year.

Many marketers avoid the affiliate channel because some affiliate networks cannibalize their client’s SEO by bidding on the same traffic, thus taking a cut of sales without adding new business, Avalone said.

One of Button’s new tools allows affiliate marketers to create holdout groups, so brands can test whether their affiliate links add incremental business or siphon off customers who were going to purchase anyways.

Publishers want the added attribution features because content creators are under-credited by last-touch measurement and sometimes have their pockets picked by retargeting vendors, since people often don’t make a purchase at once.

“Multitouch and view-through attribution models are promising for publishers because they give us a bigger window to measure the impact of our content on conversions,” said BuzzFeed commerce SVP Nilla Ali.

And reducing the need for intermediaries via automation can strengthen publishers’ relationships with retail partners – and that relations can then lead to other revenue-generating projects.

For instance, BuzzFeed’s strong affiliate partnership with Walmart led to better-performing formats, like the BuzzFeed cooking app Tasty, where users can click to add all the ingredients from a recipe into a Walmart cart for checkout.

What started as an integration to traffic readers from BuzzFeed to Walmart via static text links or buttons in an app is now a more holistic marketing partnership.

“Affiliate in its basic form is a set-it-and-forget-it model with high return on spend,” she said. “Savvy advertisers, retailers and publishers view it more now as a vehicle for strategic partnerships.”