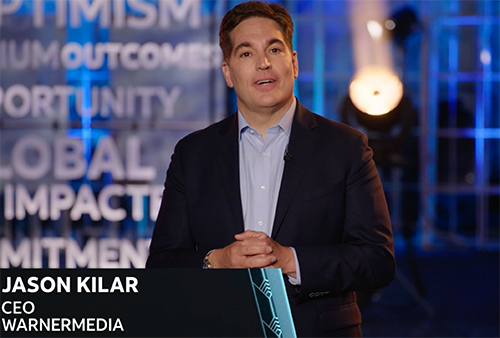 WarnerMedia and Discovery held separate Upfront presentations this week, just days after AT&T announced it would combine the media assets of the two companies in a deal worth $43 billion.

The move, which shocked the industry – and even the topmost executives at WarnerMedia – could position the new company as a major force in the streaming wars.

WarnerMedia’s HBO Max on its own struggled to compete with Netflix and Disney Plus.

During their respective Upfronts, both WarnerMedia (on Wednesday) and Discovery (on Tuesday) emphasized to prospective advertisers the better-together aspect of their coming union.

“Together, we will form a new company, super serving our advertisers with a promise to unite WarnerMedia’s brands with Discovery’s brands, all under one banner,” said WarnerMedia CEO Jason Kilar, although Kilar’s own fate is far from certain.

Discovery President and CEO David Zaslav, who will lead the new entity, called the deal “historic” and told advertisers at the upfront it would create a unique entertainment company.

The new company is expected to generate about $52 billion in revenue in 2023.

If a combined Discovery and WarnerMedia entity had already existed during the first quarter of this year, it would have equaled just over 20% of all TV ad impressions between January and April and accounted for 15.7% of national linear TV ad spend in that stretch, according to TV measurement provider iSpot.

Kilar, who is reportedly planning his exit, said it’s still business as usual until the deal closes next year. He touted WarnerMedia’s expansive footprint of properties and its content library across CNN, HBO, TNT, TBS and the Warner Bros. television and film studio. The company also called out specific high-profile content, such as the DC movie franchise and the return of “Sex and the City.”

Discovery, meanwhile, highlighted its reality TV-centric portfolio, which includes its namesake cable channel, HGTV and the recently launched Discovery Plus.

WarnerMedia added more than 11 million domestic HBO and HBO Max subscribers over the past 12 months.

Executives were (shocker) bullish on the streaming service’s ad-supported tier that’s set to launch in June at $9.99 per month, as well as WarnerMedia’s ad tech offerings.

JP Colaco, head of WarnerMedia’s ad sales, declared that the company is committed to having the lightest ad load in streaming. To that end, WarnerMedia introduced several new ad formats, including “pause ads,” which display while shows are paused, and “branded discovery,” which lets advertisers show ads as viewers navigate the content catalog.

“We have already signed deals with major agencies and brands across a diverse array of categories,” Colaco said.

“This is where addressable advertising delivers,” he said. WarnerMedia has executed thousands of addressable campaigns across its DirecTV footprint for all verticals.

In the past, addressable campaigns were mainly limited to WarnerMedia owned and operated properties.

“Now, as we build out our network of distribution partners, we have the ability to execute addressable TV campaigns across 52 million households,” said Katrina Cukaj, who leads WarnerMedia’s ad sales and client partnerships.

By the end of the year, WarnerMedia will start running addressable campaigns across the network’s own 14 minutes of national television inventory. Last year, it recruited brands across verticals such telco, QSR and insurance for national addressable beta testing.

Reach and quality were big themes during Discovery’s upfront. Executives boasted about the network’s linear and streaming programming across the Discovery Channel, HGTV, Food Network, TLC, OWN (Oprah Winfrey’s channel), Magnolia Network, and the Travel Channel.

Discovery also highlighted series that are exclusive to Discovery Plus, including spinoffs of “90 Day Fiancé” and “Gold Rush.” Discovery now has 15 million subscribers across its streaming services.

Jon Steinlauf, Discovery’s chief US ad sales officer, said that Discovery Plus is meant to complement, not cannibalize, the company’s linear channels. Across Discovery’s portfolio, it has an unduplicated monthly reach of 173 million consumers in the US, including 24 million who only watch on digital – giving advertisers access to coveted cord-cutters.

Discovery Audience Solutions is powered by OneGraph, an ad product announced last year that unifies audiences across all of Discovery’s linear and digital platforms.

“You can drill down to your exact target,” said Jim Keller, Discovery’s EVP of digital and advanced advertising sales.

Although most ads are still delivered on TV screens, more than 80% of Discovery’s digital video consumption takes place through connected devices, which sets the company apart from major streaming services that don’t feature ads, Keller said.

Discovery also partnered with iSpot that allows the network to provide third-party measurement to all clients who buy Discovery cross-platform.

Along with incremental reach, Keller said that Discovery can also deliver attribution on key KPIs, such as brand favorability and purchase intent.