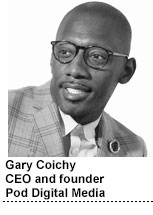 McDonald’s has been criticized for alleged bias against Black-owned media.

For example, the fast-food giant is being sued by media mogul Byron Allen, owner of The Weather Channel, Entertainment Studios and Allen Media Group, for not doing enough to honor its commitment to dedicate 10% of its ad spend to minority-owned media companies by 2024.

But McDonald’s recently made an investment in a Black-owned podcast media company that runs counter to these accusations.

In January, McDonald’s struck a multiyear advertising deal with Pod Digital Media (PDM) as part of an effort to increase its ad spend with minority content creators and expand its reach with diverse audiences.

PDM is an ad network specializing in monetizing podcasts hosted by members of the Black, Latino, Asian American and Pacific Islander (AAPI) and LGBTQ+ communities.

Although Gary Coichy, Pod Digital Media’s CEO and head of partnerships, declined to share exactly how much McDonald’s will be spending with PDM podcasts, he did say this is a three-year, multimillion-dollar deal.

McDonald’s takes its commitment to do more business with companies like PDM very seriously, Coichy said.

“We have a quarterly meeting with the CMO at McDonald’s [where] they’re asking us, ‘How can we help your business?’” Coichy said. “And if we have challenges, whether it’s measurement or tech, [they want to know] what they can do to help elevate our company.”

It has some inventory dedicated to programmatic and a partnership with mobile ad tech company AdsWizz to serve programmatic ads. But programmatic placements can often clash with the diversity of the network’s podcast content, according to Coichy.

“To be honest, we steer away from [programmatic], because, for example, if you have a woman-hosted podcast, and in comes out of nowhere a dynamically inserted ad with a male voice, it just doesn’t resonate,” Coichy said.

However, due to interest from its advertiser partners, the company has been working to expand its programmatic offerings, Coichy said.

In terms of measurement, Pod Digital Media has partnerships with Podsights and Nielsen.

In addition to brand partnerships, Pod Digital Media has also been focused on expanding its creator network.

It will soon announce its acquisition of the Latina Podcasters Network, adding the latter’s roster of 50 mostly Latina-led podcasts to its ad inventory, and is also set to announce a partnership with esports ad network ESPAT later this month.

The ESPAT partnership will help PDM capitalize on the popularity of video games and esports among Black, Latino and AAPI audiences, particularly the Gen Z cohort, Coichy said.

In addition to these more recent deals, Pod Digital Media also has worked with the National Basketball Association’s Josh Hart and Aaron Gordon and the National Football League’s Aqib Talib, Takeo Spikes and Tutan Reyes to create and monetize podcasts for the NBA’s and NFL’s massive and diverse fan followings.

And in May of last year, PDM launched its own dedicated app to help listeners discover shows hosted by podcasters of color.

Back to the start

Although Pod Digital Media has a lot of deals in the works, the McDonald’s deal was especially significant for Coichy, whose first job as a teenager was working as a cashier at a McDonald’s drive-through in Nyack, NY.

Coichy went on to carve out a career for himself in the advertising industry, working with ad agencies such as WPP-owned MediaCom, Omnicom Resolution Media and Laundry Service before founding Pod Digital Media in 2018.

Asked what advice he would offer those looking to follow a similar career path, Coichy pointed to the opportunity that exists now for diverse entrepreneurs to capitalize on their unique experiences and cultural knowledge.

“Create something that brands can leverage,” Coichy said. “If you’re a minority owner, you can use that as an additional opportunity to connect with brands that are looking to spend money with you specifically.”