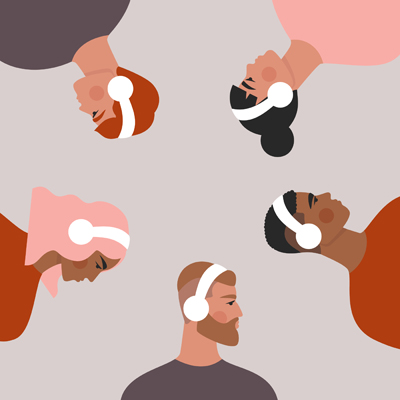 From “hear” to cookieless eternity.

As a quick refresher: Pandora bought AdsWizz in 2018 to amplify its programmatic ad sales capabilities. Later that year, SiriusXM acquired Pandora, followed by podcast app Stitcher in 2020. The companies were combined in order to expand their reach, bring more distribution in-house and gain some ad-supported streaming chops.

AudioID, which SXM has been testing across its owned-and-operated media network since last year, aims to unify its understanding of users across different digital audio environments, said Maria Breza, VP of ad quality measurement and audience data operations at SXM Media.

AudioID uses an algorithm to match and encrypt different consented listener signals, including mobile ad IDs and email addresses, to reach people across Pandora, SiriusXM and Stitcher. Later this year, the plan is to extend these first-party audiences via AudioID to opted-in listeners across the wider AdsWizz network of audio and digital publishers.

To start, the new ID will primarily support reach, frequency and targeting use cases. Eventually, advertisers will be able to use AudioID for content recommendation, measurement and, down the line, sequential messaging.

Historically, though, identity in audio has been a hodgepodge.

Each part of SiriusXM’s business has different targeting strengths and weaknesses. For example, the podcast ecosystem is generally identity poor, though podcasts can experiment with speech-to-text tools that help advertisers properly categorize content. Alternatively, contextual can be challenging in live broadcast content environments like the SiriusXM app. Meanwhile, music streaming via a platform like Pandora is more easily targetable based on language, genre, playlist, age and other behavioral signals.

The answer to these contextual targeting issues is to create something that can stitch identity together across platforms.

But considering the current overheated regulatory environment and privacy-related platform changes, both recently rolled out and coming soon, tying identity together across channels (both O&O and farther afield) can’t rely on legacy identifiers like device IDs alone, said Andrei Petrus, director of product management for ads and the listener experience at AdsWizz.

It became clear several years back “that we need to move away from trying to understand who the user is, but rather try to understand their preferences and choices based on consumption,” Petrus said.

With that in mind, SXM Media designed AudioID to be as adaptable and interpretable as possible, so it could connect to everything from new contextual signals to other unified IDs and identity alternatives, like Google’s newly released proposal for the Topics API in the Privacy Sandbox.

“AudioID really wants to be open,” Petrus said. “We want to offer whoever wants to integrate on the platform as a partner the capability [to do so].”

SXM Media is also modeling non-PII first-party data, like the types of content people listen to, as a way to increase reach against look-alike audiences in other environments, including podcasts, said Breza. For now, it’s running those experiments on the Pandora platform.

People do want to discover content based on their interests, but advertisers and publishers need to balance that with the need for privacy protection, she said.

“In the digital environment,” Breza said, “we need to figure out how to respect that, but still understand their passions and choices and deliver the content they want and advertising that doesn’t detract but is in some way additive to their experience.”