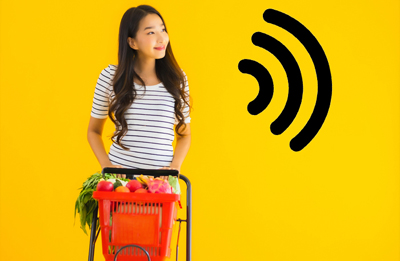 Sometimes, capturing a shopper’s heart and mind involves their ears.

On Thursday, Place Exchange, a supply-side platform for out-of-home inventory, said it will start facilitating programmatic audio-based ad buys in grocery and drug stores through its partnership with Quotient, a digital ad services platform for retailers.

The audio inventory will come courtesy of InStore Audio Network, which aggregates digital in-store audio messaging opportunities across retailers in the US. The network reaches more than 100 million shoppers across roughly 16,000 stores on a weekly basis, including Albertsons, Safeway, Southeastern Grocers, CVS and Rite Aid.

Although the pandemic tossed a curveball at place-based media – the sort of context-driven advertising you see in gas stations, restaurants, bars, gyms, malls and on top of taxis – “retail felt fireproof,” said Dave Etherington, chief commercial officer at Place Exchange.

“We saw audiences maintain within retail environments and even increase in a lot of cases,” he said.

And using audio to reach those shoppers at the point of purchase when they’re in a store – or perhaps even walking down a specific aisle – can be “a powerful environmental cue,” said Michael Lieberman, US CEO of Kinetic Worldwide, which is looking into testing in-store audio for clients.

“Audio reaches every shopper in every aisle,” Lieberman said, making it an effective “last mile” form of advertising, he added.

Although physical in-store signage can sometimes be obscured, audio promotions play over a store’s main PA system in between music and other announcements, and only one audio ad can play at a time.

Customers in the pharmacy aisle, for example, can be wooed over to the dairy section to check out a deal on yogurt, or shoppers browsing cereal can be informed about a sale on cough syrup.

“Unlike a lot of other formats, you wind up having a full-store experience regardless of the aisle you’re in, and you can reach people with some degree of frequency to drive home a purchase,” said Norm Chait, director for out-of-home product and sales at Quotient.

Buyers can access the in-store audio media, which is sold on a CPM basis, through Quotient’s DSP, which supports both self-serve and managed options.

The spots can be targeted based on segments derived from Quotient’s proprietary data, which comes from aggregated opted-in mobile device IDs that demonstrate where people are, the stores they visit and the screens they pass.

Quotient, which has direct partnerships with advertisers and retailers, including General Mills, Procter & Gamble, Clorox, Unilever, CVS and Dollar General, regularly refreshes its data by looking at changes in how shoppers move across individual stores and groups of stores.

Consumers need to opt in, generally through one of Quotient’s coupon apps and have their phone’s location services switched on to be included, although the data that’s used for targeting is anonymized and aggregated. The purpose is to identify locations that index well against buyers interested in specific products – like haircare, for instance, or granola bars – not to target specific individuals.

When audio advertising is targeted by place – e.g., allergy meds in a drugstore – the targeting feels more natural. “Audio is useful because you can help with decision-making based on where someone is versus who they are,” Etherington said.

Campaign measurement comes in a few different flavors depending on a brand’s KPIs. Quotient can do sales attribution by combining audio exposure data matched back to loyalty card and purchase data. Advertisers can also run brand lift studies for clients and measure the increase in shopper intent to purchase or recommend a product.

“In-store audio can be a performance channel, and that allows us to tap into shopper dollars at a national level,” said Chait. Many retailers are also eager to bring new formats into their own budding media networks.

Although digital out of home still makes up a relatively small portion of most media plans today, Kinetic’s Lieberman said the growing availability of programmatic execution appeals to many clients who were previously reluctant to consider OOH media.

“The audience-based approach, faster turnaround times and national scale can all be important arguments in favor of OOH for brands who saw OOH as too local, too long to market or simply never thought of those as channel strengths,” Lieberman said.