According to three publishers who were briefed about the deal, GroupM will begin to rout a majority of its demand through Index Exchange as part of a supply-path optimization (SPO) effort.

Concentrating demand on Index’s pipes will allow GroupM to negotiate better rates with publishers, curate access to supply and build an identity solution that could work as cookies disappear.

For Index, representing demand from the largest media buyer in the world makes it an indispensable partner to publishers as the SSP category commoditizes.

GroupM and Index are expected to sign a formal, non-exclusive partnership in the first weeks of March around these goals.

“GroupM continuously evaluates our programmatic supply chain partners to identify those that provide our clients with the most transparent and efficient access to premium publishers,” a GroupM spokesperson said. “As a result, we have been working more closely with a smaller set of suppliers, including Index Exchange. As the marketplace continues to mature, having deeper and more transparent relationships on this side of the supply chain will continue to be critical to leverage on behalf of our clients, short and long term.”

“We are supporting GroupM with their ongoing supply-path optimization efforts aimed at giving clients buying options and control, with high-quality inventory and market-leading transparency into fees across the entire supply chain,” an Index Exchange spokesperson said.

It started with SPO

After header bidding allowed publishers to run multiple auctions at once, agencies responded with SPO, which helps them route spend through the most efficient and safest paths to inventory. SPO kicked off a wave of consolidation among SSPs, with many agencies whittling down the exchanges they work with from more than 80, in some cases, to four or five preferred partners.

Now that agencies have partnered with a smaller group of SSPs, they want to leverage those 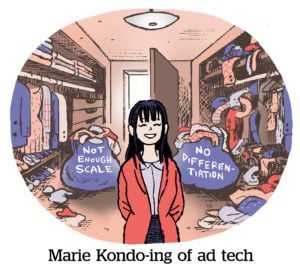 GroupM is not the only holding company aligning with SSPs. All of the big six holding groups have been formally vetting SSPs over the past few years, and many have consolidated on three to five trusted partners.

But such a formal partnership between an SSP and a holding company is unusual, and anticipates a trend in which SSPs, fighting for survival due to consolidation in the category as well as increased focus on SPO, are looking at holding companies as a lifeline.

In partnering with agencies, SSPs get access to premium and unique advertiser demand, which keeps them relevant among publishers.

“The space has become a lot more aware of consolidation,” said Andrew Goode, EVP, head of programmatic at Havas Media. “I wonder whether they see the writing on the wall.”

Meanwhile, holding companies get more control over the supply chain and are able to extract savings for clients to direct more money to working media. They can also use their clout with SSPs to extract discounts, curate inventory and create custom products they can tout in pitches.

“Agencies are looking to continue to show savings in programmatic,” said Chip Schenck, SVP of data and programmatic solutions at Meredith. “Like all participants, they’re trying to have better leverage within the auction.”

In these agency-SSP deals, agencies negotiate with SSPs on three different flavors of discounts for their clients.

On a volume-based discount, an agency routing most of its spend through one SSP can negotiate savings on the overall buy. Premium publishers, who get more spend when demand goes through fewer pipes, willingly offer volume discounts.

On a fee-based discount, SSPs cut their fees from each bid and pass those savings along to buyers. Because bids are submitted on a gross basis, lowering the SSP fee decreases the ad tech tax and puts more money toward working media.

But the SSP takes a hit on the chin.

“This is where it’s a little bit of a dangerous game if you’re [an SSP],” said Jeremy Hlavacek, head of revenue at Watson Advertising. “That’s probably not going to be good for your margin.”

To avoid margin compression, SSPs are also building products that give agencies post-auction discounts, which allow them to bid at a higher value than what they actually pay the publisher. The SSP can make a bid look like its competing at $10, for example, but the publisher only gets $9.

While most large publishers are fine with volume and fee-based discounts because they end up receiving more valuable bids overall, many don’t like post-auction discounts, which take away some of their control over the auction and make real-time yield analysis more challenging.

“If my yield declines, I will go through another SSP,” Hlavacek said.

Identity is a component of the deal between GroupM and Index Exchange, with GroupM looking to take advantage of Index’s integrations with The Trade Desk’s unified ID solution, DigiTrust and LiveRamp. (Index is also a big partner to Merkle, integrating with M1 and more recently Merkury. Merkle is owned by Dentsu-Aegis, which is competitive to WPP.)

This isn’t the first time agency groups have tried to align with individual SSPs, from WPP investing $25 million in AppNexus in 2014 to Goodway Group and PubMatic partnering on volume-based spend discounts last year.

But these alliances are tricky because they raise questions about agency neutrality. Publishers don’t want agencies to dictate where to auction their supply, and holding companies likely won’t want to work with SSPs that are driving discounts to their competitors.

Agencies have to be especially careful when entering these partnerships to remain neutral for their clients and pass along any savings, or risk being burned by transparency issues again.

“Historically, agencies have a tendency to look at ad tech as a business opportunity,” Hlavacek said. “It’s important that all parties are clear on the business terms.”

None of these arrangements are set up for the agency to make money, argued Goode, but rather to get closer to the publisher and drive more spend toward working media.

“The old agency approach was we’re going to beat you up for cheaper rates or rebates,” he said. “Now it’s about getting access to specific inventory or data. And if I can buy at scale, how can we make the pipes work more efficiently?”