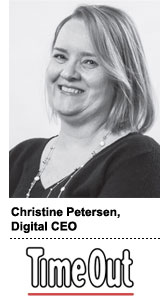 As print publishers figure out how to remake themselves for digital, Time Out has come up with an unusual solution: Borrow the revenue model – and former CMO and president – of TripAdvisor.

Time Out once recommended events, hotels and restaurants to readers, but it no longer stops there. Now the publisher allows readers to book these experiences directly from its site.

To guide the publisher through this transition, Time Out Digital hired Christine Petersen as CEO in April. An early employee of TripAdvisor, she served as the travel review platform’s first CMO and later as its president over a nine-year run.

She, along with Time Out CEO Julio Bruno, felt that the TripAdvisor model, which combines reviews of hotels and attractions with affiliate links for readers to make reservations, would work for Time Out.

“We found out that 95% of people that engage with Time Out content do something,” Petersen said. “They pick up the magazine or visit the website, and then they take action. They just don’t do it with us.”

Plus, many readers are visitors, not locals. Two-thirds of visitors to Time Out New York’s website, for example, don’t live in the city. And half of those visitors browse the site from the West Coast or outside the US.

Armed with this knowledge, one of the first things Petersen did was start adding “book” buttons, page by page.

Readers can now book hotels and attractions after reading reviews of properties, which Time Out Digital ensures rank highly in Google search results.

Current partners include Booking.com, Viator, Broadway.com and OpenTable. And the publication is working to add more affiliate partners, including the leaders in every market where people read Time Out.

In the first half of the year, those adjustments boosted ecommerce revenue by 51%.

Petersen is also working to expand Time Out’s global footprint. The publication has a presence in 108 cities in 39 countries. But some of those presences are superficial, occurring through licensing agreements, which Time Out is in the process of buying back.

“The reality is that we are not in [those markets] in a real way,” Petersen said. “We might have a travel site, but we are not in them the way we are in New York, London and Chicago.”

She plans to build more content in different Time Out cities, and she’s also translating content into other languages to make it more broadly available, mirroring her efforts at Time Out.

Time Out London content is being translated into French, for example, since the company already has an office in France. Content for Time Out Miami can be translated into Spanish to take advantage of the many Latin American travelers to the city.

But as Time Out grows its affiliate revenue, what does that mean for its banner ads?

Having banner ads and “book” buttons on a single page affect performance. Affiliate links don’t perform as well when banner ads are present, and banner-ad clicks and engagement decline when there are also affiliate links.

That’s especially true for mobile, which accounts for about 65% of Time Out’s traffic. Interestingly, mobile does not affect Time Out Digital’s affiliate revenue, but a big gap still exists between display and mobile ad monetization.

To maintain readers’ user experience and advertising performance, Time Out Digital is optimizing its site page by page and determining if it should run “book” buttons or display ads.

An article about the top 100 movies of all time will work well for movie studios or CPG advertisers, but an article about top hotels in New York will prioritize affiliate partners. Time Out Digital sells those spots direct or programmatically.

Time Out’s sales team also focuses on selling bespoke sponsorships to events such as the “Battle of the Burger” events it hosts in different cities.

“We have seen 20% lifts in terms of our partner brands’ awareness and a 100% lift in desire to use the brand later,” Petersen said.

Six months into her new gig, Petersen is glad she doesn’t have to handle one task this time around: building the brand.

“At TripAdvisor, I had to grow a brand, and that’s time-consuming, expensive and difficult, and it excited me that this wasn’t one of the problems we had to solve,” she said. “Time Out is a phenomenal brand that has been attracting millennials – they weren’t called that back then, but urban audiences interested in going out and having experiences – for 50 years.”