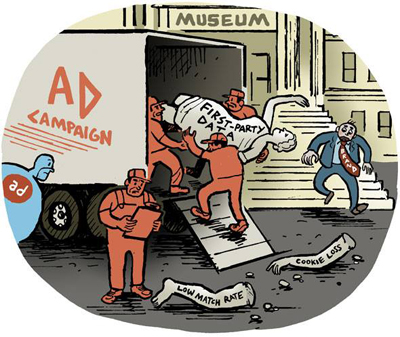 The Trade Desk is on a tear, striking three partnerships in quick succession over the course of a week to support the Unified ID 2.0 initiative.

First was LiveRamp, then Criteo, followed by Nielsen. Each partnership tackles a different piece of the development process for UID 2.0, which aims to use encrypted and hashed email addresses to create a standard identity replacement for third-party cookies.

Inking these high-profile deals, particularly with vendors that are also the largest technical gateways to inventory, measurement and data for their clients, is necessary to achieve the industrywide collaboration vibe that TTD is going for.

“The more collaborators join this initiative, the more critical mass it will achieve in the market,” said Michelle Hulst, EVP of global data and strategy at The Trade Desk.

But how do these deals differ, what exactly are LiveRamp, Criteo and Nielsen contributing to the process and what does The Trade Desk still need to do?

Nielsen is collaborating with The Trade Desk to improve measurement applications of Unified ID 2.0 and refine the technical spec.

“We’re providing feedback on components, like ID longevity and interoperability with other measurement approaches in the run up to a proof-of-concept test of the UID 2.0 in Nielsen’s Digital Ad Ratings product,” said Nikesh Patel, SVP for measurement product development at Nielsen.

Starting in mid-December, LiveRamp will embed the UID 2.0 into its infrastructure and make it available to both SSPs and DSPs for transactions downstream.

Publishers using LiveRamp’s Authenticated Traffic Solution (ATS) will get access to both its proprietary IdentityLink ID and to the Unified ID. Buyers through The Trade Desk will be able to bid on LiveRamp IDs, and ATS publishers will be able to use UID 2.0 to make their inventory more targetable and appealing to buyers.

Criteo joined the Unified ID 2.0 initiative to build the sign-on interface component of the solution and to co-develop the transparency portal that consumers will use to provide or withhold consent.

But Criteo will eat some TTD dog food to help ensure that the ID scales and gains wide adoption.

“Criteo plans to bid on it in the future, while also providing the consumer SSO [single-sign-on] solution to help a growing group of industry partners get that scale,” a Criteo spokesperson told AdExchanger.

Speaking of scale, ubiquity is a massive challenge with any identifier built on deterministic audience data.

The main functional limit of UID 2.0’s current design proposal is its reliance on authentication through logins to identify users, said Mathieu Roche, CEO and co-founder of identity company ID5.

“It’s great for accuracy, but we know that this method doesn’t scale,” Roche said. “The market expects user identification to work at scale, including for non-logged in users, and this is currently not addressed by the proposed UID 2.0 specs.”

(ID5 launched its own partner program on Wednesday with 27 members, including CafeMedia, PubMatic and Eyeota, aiming to devise universal cookieless solutions.)

One way to achieve scale would be for The Trade Desk to sign up publisher partners. Identification and authentication starts with publishers.

An announcement from a publisher – or a brand for that matter – pledging to use the framework would boost UID 2.0’s profile beyond the ad tech world, said Nicole Perrin, a principal analyst at eMarketer.

According to Hulst, The Trade Desk will add new partners in the weeks to come, including with supply-side partners, advertisers and publishers. TTD has also done proof-of-concept testing with publishers and other “ecosystem partners,” she said.

Despite growing momentum, a question remains about how UID 2.0 will be governed. The Trade Desk has said it will eventually be administered by an independent entity, but who?

The only entity that makes any sense is some type of trade or industry body, Perrin said, such as the Partnership for Responsible Media, or perhaps a new body can be created specifically for this purpose.

It’s a little early to share specifics, though, and The Trade Desk is still “looking at options,” Hulst said.

“That part of the process won’t be finalized until we get closer to the final product launch, and as more industry partners provide input,” she said.

TTD will keep adding new partners throughout the rest of this year, with UID 2.0 set to go GA at some point during the first half of 2021.

TTD is touchy on the subject of who owns the Unified ID 2.0 initiative. It’s designed to be an industry effort. But the digital ad ecosystem is littered with the bodies of failed and/or aborted identity consortiums and attempts at a universal ID. (See: DigiTrust and the Advertising ID Consortium backed by LiveRamp.)

Although The Trade Desk is spearheading the development of Unified ID 2.0, company executives are always very quick to point out that multiple companies are contributing code.

Even so, most marketers don’t fully realize that the Unified ID 2.0 is a Trade Desk product, Perrin said.

The bigger problem is a lack of clarity in the marketplace about exactly what UID 2.0 is and which problems it solves for addressable media.

“Marketers still have a lot of work to do to educate themselves about those problems,” Perrin said. “And that’s making it difficult for them to understand the solutions being presented to them.”

But it’s up to everyone to involve themselves in the quest for an interoperable standard, including publishers, said Nielsen’s Patel.

“The important thing for publishers and platforms is to realize that sitting on the sidelines is the same as voting for silos in the future,” he said. “Active engagement – even if it’s to disagree – is better than abstaining, because this is a collective problem.”