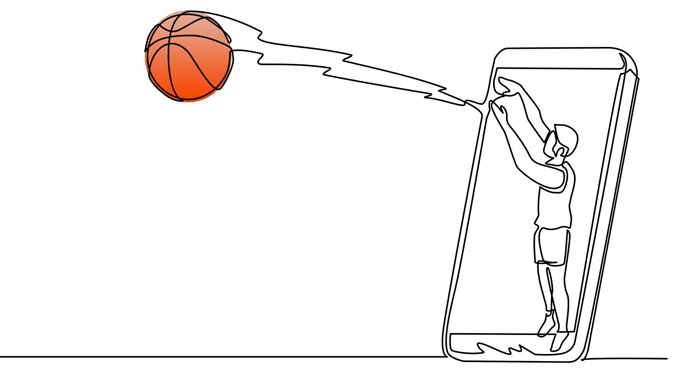 The National Basketball Association is scoring higher tune-in for live games by optimizing its media planning using attention, including on connected TV.

The league has been on the hunt for a more effective real-time optimization metric tied to larger business goals, like brand lift and tune-in, said Larisa Johnson, VP of paid and CRM media at the NBA.

That need became imperative coming out of 2020. The NBA knew it possessed a strong brand that was highly relevant culturally, with players pushing for social justice reforms after the murder of George Floyd and following the successful completion of an entire playoff season in a bubble with only minimal setbacks.

But ratings were down. So the NBA was looking to shake things up in its channel mix and choose placements that were more predictive of positive outcomes.

“With business metrics only being available post-flight, we were previously operating in the dark while the campaign was live,” Johnson said.

With help from its media buying partner, IPG-owned Mediahub, the NBA started experimenting with a new CTV product from Adelaide, a startup that’s developing an attention-based ad currency it calls the “attention unit” (AU).

As opposed to viewability, which measures the opportunity for an ad to be seen, AU aims to help advertisers predict the opportunity to grab attention tied to likely outcomes across channels.

Media placements are given quality scores that rate how likely they are to capture attention. If you capture attention, positive business outcomes follow. Adelaide uses a mix of different machine learning algorithms depending on the channel to analyze whichever signals are the likeliest predictors of quality and attention.

On the web, those signals usually include the position of a media placement, the duration of exposure and the amount of clutter on a page. But it’s a completely different story on CTV, where attention-grabbing signals include the ad pod, the genre and the time of day when an ad runs.

When Mediahub started looking at CTV media quality through the AU lens as part of the planning process for the NBA last year, it noticed a massive spread between what Adelaide characterized as low-attention versus high-attention placements.

“That gave us a clear, tactical way to optimize our plan by moving money from low to high attention media,” said Ed McElvain, EVP for digital platforms and data-driven media at Mediahub.

By focusing its media budget on high-attention placements across both CTV and digital, the NBA saw a 36% higher tune-in rate for live games compared to when it bought against placements with a lower AU score.

The NBA now uses AU as its main optimization metric, Johnson said, which “helped justify that the cost of certain premium placements really are worth the price tag.”

Adelaide and Mediahub are in the process of working together to co-develop media buying and planning technology that bakes in attention-based media quality metrics.

Although startups like Adelaide have been trying to make attention metrics happen for years, it’s been slow going. Ad buyers are accustomed to their familiar proxy metrics, and they’ve been loath to change, even though most know they could be getting more out of their media.

But the end of third-party cookies and the general move toward more privacy-protective technologies is making advertisers more amenable to trying a different approach, Guldimann said.

“They’ve always known that not all impressions are the same, but they’ve been able to rely on attribution systems to see where they’re getting value,” he said. “As that becomes less tenable, there’s more of a desire to understand the quality of the media they’re buying.”

The fact is, attribution is turning into “swiss cheese,” McElvain said.

“We may or may not be able to know the action someone took based on the device or the preferences of an individual, but we can use attention to influence our buying without having to rely on a workaround,” he said. “We’re seeing a lot more clients open to having that conversation this year than last year.”