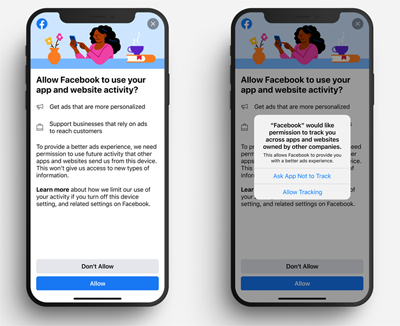 The additional prompt is meant to provide more information about Facebook’s privacy controls and how it uses data to personalize advertising before users are presented with the choice to allow or deny app tracking.

Facebook says this is necessary because while Apple will let developers customize some of the language in the ATT pop-up, there isn’t much room to convince someone to opt into tracking.

Facebook will experiment with showing both Apple’s prompt and different version of its own test screen, although it hasn’t yet finalized exactly when during the onboarding process, or user flow, it’ll display the prompts to users.

In one example of its test screen, Facebook encourages users to share their app and website activity as a way to “support businesses that rely on ads to reach customers.”

Facebook has been on a massive anti-Apple PR blitz since late last year that casts itself as the savior of small business. On a call with reporters in mid-December, Dan Levy, Facebook’s VP of ads and business products accused Apple of making changes to the digital ecosystem that will hurt small businesses already struggling to stay afloat during the pandemic.

Some Facebook employees claim this messaging is hypocritical and dissonant for a company that made $84.2 billion in advertising revenue in 2020 alone.

For example, according to Buzzfeed, in response to an internal post from Levy about Facebook’s campaign, one Facebook’s engineer wrote, “It feels like we are trying to justify doing a bad thing by hiding behind people with a sympathetic message.”

Despite its full-throated objections to Apple’s IDFA changes, Facebook is subject to them, just like any developer.

Although Facebook initially said it would stop collecting the IDFA on iOS 14 devices, it later backtracked. Facebook has said that if it doesn’t agree to show the prompt, Apple will not allow Facebook to make its apps available in the App Store.

Developers will be required to get permission through the AppTrackingTransparency prompt for any data collected in an app that’s being used for tracking.

Although the App Store guidelines prohibit developers from using language in the ATT prompt that incentivizes people to allow tracking, Apple has said that it’s okay for developers to provide additional information to educate users before showing the ATT opt-in pop-up “as long as you are transparent to users about your use of the data in your explanation.”