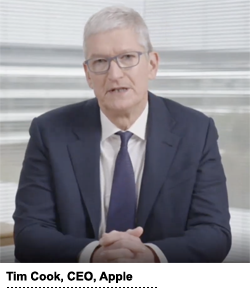 That’s when Apple will start requiring apps and advertisers to get permission before they can use the IDFA for tracking and ad targeting.

After leaving developers on tenterhooks for months, Apple finally shared its broad timeline for AppTrackingTransparency (ATT) implementation in a blog post on Thursday, which also happens to be Data Privacy Day, an annual international event that aims to raise awareness and promote privacy and data protection best practices.

To commemorate the day, Apple CEO Tim Cook shared his unvarnished thoughts on what he referred to, and not for the first time, as the “data industrial complex.”

“If we accept as normal and unavoidable that everything in our lives can be aggregated and sold, we lose so much more than data,” he said during a virtual panel discussion as part of the 2021 Computers, Privacy and Data Protection conference. “We lose the freedom to be human.”

The general consternation that’s been swirling in the mobile ad industry around ATT is just a “microcosm of the debate that we have been having for a long time – one where our point of view is very clear,” Cook said.

“Technology does not need vast troves of personal data stitched together across dozens of websites and apps in order to succeed,” he said. “Advertising has existed and thrived for decades without [that].”

The point of ATT, Cook stressed, is to give app users a say over how their data is handled.

Cook claimed that Apple has “worked closely with developers to give them the time and resources” to implement ATT, although there are a lot of developers out there that might disagree with that statement.

But in the eyes of Apple and regulators, particularly in Europe, ad tech has become synonymous with bad behavior and opacity.

“There are hundreds of ad tech companies tracking users and these entities are totally unknown to users,” said Marcel Kolaja, a Czech politician and a VP of the European Parliament. “The opacity of the ad tech system is clearly one of the issues.”

On the one hand, explaining the programmatic supply chain to the average consumer and then expecting them to make an informed choice is a nonstarter.

But on the other, it’s a “false dichotomy” to claim that the collection of “unlimited personal data” is necessary to provide a good digital experience, said Jane Horvath, Apple’s senior director for global privacy.

“At the end of the day, all we’re doing with the AppTrackingTransparency framework is giving users choice and asking individuals whether they want to be tracked or not,” Horvath said. “Isn’t it odd that some people don’t want users to have the choice over whether or not they are tracked with clear or precise language?”

But anyone who suggests that privacy changes will ruin the business of the internet is mistaken, because “the web is already broken,” said Mozilla’s chief security officer Marshall Erwin – and “especially advertising.”

Although Mozilla tries to be mindful of feedback from the industry whenever it makes a privacy update to Firefox, it sees resistance “as a positive sign we’re on the right track,” Erwin said.

“Every major privacy initiative Mozilla has tried to lead and drive over the last decade has resulted in a significant amount of pushback from the part of the industry that wants to retain their somewhat illegitimate foothold,” he said. “If we are not doing things that make people a little bit uncomfortable, even a little bit upset, then we are probably not doing the right thing to fix the internet.”