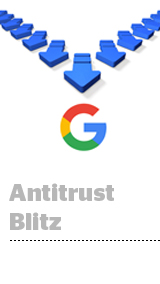 Usually, you’ve got to pay lawyers for legal advice.

But between sessions at Fordham University’s annual conference on international antitrust law and policy in New York City on Friday, there was lots of informal chatter about Google’s growing list of antitrust inquiries.

The takeaway: This isn’t Google’s first antitrust rodeo, but it might be different this time.

Fifty attorneys general, led by Texas; the Department of Justice; and the House Judiciary Committee are all pushing their own, separate antitrust investigations.

This week, the AGs sent a subpoena to Google jammed with more than 200 questions and demands about its ad business, and, on Friday, the House Judiciary Committee asked Alphabet, Facebook, Amazon and Apple to share executive emails and documents related to mergers.

But despite what seems like breakneck movement based on constant headlines, these things take time.

The requests for information, the subpoena and the demands for detail are just the beginning of what’s going to be a long process. Regulators don’t make snap judgements, they amass evidence and review data before they even think about taking action.

And Google’s best move when regulators ask questions is to, well, answer them.

While European enforcers can impose restrictions without having to bring a case in court, US federal authorities either have to prosecute in order to obtain an injunction and get a company to change its behavior or reach a settlement with that company.

Google can’t be forced to change anything about its business in the United States as a result of an antitrust inquiry unless Google agrees to change or loses in court. Google’s plan is work “constructively” with regulators as it claims to have done in the past.

And Google, for its part, isn’t a stranger to these sorts of inquiries, both in the United States and farther afield. It’s been the subject of multiple investigations over the years, including a Federal Trade Commission poke into its search business and competition in the smartphone market in 2011. Google emerged from the encounter after two years in 2013 largely unscathed and with no fine.

So, business as usual for Google?

Maybe not this time. The multiple antitrust inquiries buzzing like bees in Google’s bonnet didn’t develop in a vacuum. There’s been a groundswell of political and public interest in big tech and antitrust issues both in the United States and around the world, with most of the action coming out of Europe.

As one attendee at the Fordham conference noted during the morning break, today the frontlines for antitrust enforcement are in Brussels, not DC. Whereas enforcers around the world used to look to the Unites States for guidance on antitrust, it’s now Europe, and not the United States, leading the charge against massive US technology firms.

But even if the AGs or others are pulling a me-also with their investigations because they don’t want to be seen as inactive, global attention is focused on big technology platforms, and on Google in particular.

Google might be used to taking questions from regulators, but it’s possible the answers won’t satisfy in the current climate.