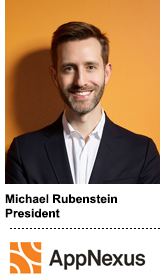 Longtime AppNexus President Michael Rubenstein will leave the business at the end of the year.

Rubenstein is the latest top executive at AppNexus to leave since the company was acquired by AT&T under its Xandr unit for $2 billion in June 2018. Founder and CEO Brian O’Kelley left the company in October 2018.

Rubenstein joined AppNexus as president in 2009 from DoubleClick, where he founded and led Google AdX. At the time AppNexus was a two-year-old startup, and Rubenstein was instrumental in growing the company into a formidable Google competitor. Rubenstein also sits on AppNexus’ board of directors.

Post-acquisition, Rubenstein oversaw the integration of AppNexus into Xandr, where its exchange serves as the company’s technology infrastructure.

In May, Xandr launched publisher network Community, which allows buyers to monetize a curated pool of inventory with Xandr data. AppNexus rebranded its demand-side business into Xandr Invest in June, followed by its exchange, which it rebranded to Xandr Monetize in September.

“Since completing our sale over a year ago, I’ve worked tirelessly alongside [Brian] Lesser [CEO, Xandr] and the rest of our leadership team to integrate AppNexus within Xandr and set the foundation for our collective future success,” Rubenstein wrote in a note to employees obtained by AxExchanger. “I'm writing today to let you know that after a decade, and with the integration meaningfully complete, I feel it’s the right time for me to leave the company in your capable hands and begin my next journey.”

Rubenstein does not have another job lined up, but rather will focus on angel investing, philanthropy and non-profit work, a Xandr spokesperson said. He was recently honored by the UJA’s technology division for his achievements in the space.

Xandr will look for a replacement for Rubenstein, but has not yet named a successor. He had been talking to Lesser about his departure for “some time,” he wrote, so the company may already be on the hunt for a replacement.

His full memo is printed below.

Ten years ago this week marked the start of an incredible journey for me. I left Google/DoubleClick to join AppNexus, a young startup with big dreams, amazingly talented people, and what seemed like a very small snack drawer. I knew our aspiration to build the world’s best and most powerful ad platform seemed improbable on paper, and that I was taking a big leap. But the fearlessness, energy and grit of the team convinced me we could overcome the odds, take on giants, and create something remarkable – and we did. Today, we aren't just a global leader in internet advertising, we're the technological foundation of Xandr, and a key component of AT&T, one of the biggest and best companies on the planet.

As you know, since completing our sale over a year ago, I’ve worked tirelessly alongside Lesser and the rest of our leadership team to integrate AppNexus within Xandr and set the foundation for our collective future success, and I've been so proud of your dedication to helping us become one unified organization. With the launch of product offerings like Community, Xandr Invest, and Xandr Monetize, and with our fearsome spirit intact, I can’t be anything but thrilled by what we’ve already accomplished and by how well we’re positioned for the future.

I'm writing today to let you know that after a decade, and with the integration meaningfully complete, I feel it’s the right time for me to leave the company in your capable hands and begin my next journey. In transparency, this is something I've been openly discussing with Lesser for some time, but I’ve been committed to helping Xandr’s leadership and every one of you through the full integration before sharing more broadly. I expect to still be here with you well into Q4 to ensure we have a smooth transition, our clients are set up for success, and our go-to-market teams are ready for 2020.

I realize that change is hard. We’ve experienced a lot of it together during the past year, and the decision to step away was and is difficult. But I do know that this is the right time for me, and that Lesser is the right leader to make the next improbable dream for Xandr's future, probable. I trust him and you all to lead this company to another level of growth and to establish Xandr as the leading marketplace for monetization of premium content.

The hardest part for me will be leaving you all, the most brilliant, resilient, caring, and passionate group I could ever encounter. It’s been my great privilege to collaborate with you to building this company. Thank you for making this an incredible part of my life and for welcoming me into yours. We have created something special at Xandr – nurture it and take pride in it.