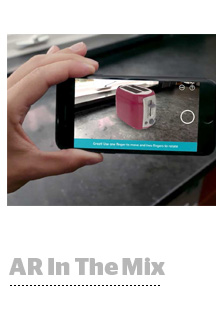 Augmented reality is about to hit its stride thanks to large media platforms, which are leading the way.

Snap was early, but over the past 12 to 18 months, Facebook, Google, Apple, Amazon, Microsoft, Alibaba and others have all made big bets on AR by either investing in companies or creating (some might argue copying) proprietary products.

Nearly all the big platforms have their own AR developer toolkits.

Apple launched Version 2.0 of its ARKit in mid-September, which makes it easier for advertisers to create branded filters and tap into the iPhone’s three-dimensional camera functionality. Facebook has its Camera Effects platform and plans to roll out AR-enabled ads for the news feed in time for the holidays. Google has ARCore, which developers can use to build AR experiences for Android.

And with a tool called AR View, Amazon allows people to see what items will look like in their homes before placing an order.

God help us, smart glasses could even be making a comeback. Snap is still pushing its Spectacles, Magic Leap is pouring cash into its mixed reality goggles, Microsoft has its HoloLens headset and Apple acquired a company called Akonia Holographics in August that builds displays for AR glasses.

“The tech giants have jumped in,” said Ori Inbar, founder of Super Ventures, an early stage VC fund for AR startups, speaking Thursday at VentureFuel’s Brew summit in New York City. “That’s a huge indicator of where the market is, and it’s driving a lot of the adoption we’re seeing.”

And where the tech giants jump, lustful startups follow. Inbar claims roughly 1,500 AR-related companies have pitched his fund in the last three years. More than $3 billion was invested in AR startups over the past year, according to Digi-Capital, a consulting firm that advises AR and VR companies.

Marketers, however, are still figuring out how to get the most out of consumer-facing applications for augmented reality.

Enterprises are embracing AR (and VR, to some extent) as a sales tool or a way to train technicians or healthcare professionals. But other than messing around with Snap filters, most advertisers still are at a loss for how to deploy AR as a revenue-generating part of their marketing mix.

“The marketer’s problem now is that there are so many pockets of innovation,” said Sarah Fay, a partner at AI tech-focused VC fund Glasswing Ventures and former CEO of Isobar and Aegis Media North America. “Things get fragmented in so many different directions.”