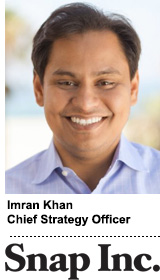 Snap’s chief strategy officer, Imran Khan, is leaving the company to pursue other opportunities, it announced in an SEC filing Monday morning.

Khan did not disclose his next role. He plans to stay at Snap for an unspecified interim period to help with the transition and recruit a new chief business officer.

“This has been a very difficult decision for me to make,” Khan wrote in a note to employees. “There is never a perfect time to say goodbye, but I know that the time is now.”

According to the filing, Khan’s departure is “not related to any disagreement with us on any matter relating to our accounting, strategy, management, operations, policies or practices (financial or otherwise).”

“Imran has been a great partner building our business. We appreciate all of his hard work and wish him the best,” CEO Evan Spiegel said in the filing.

Snap stock was down almost 2% on the news of Khan’s departure.

Khan is leaving Snap at a tumultuous time for the company, which has been suffering from an unpopular redesign and competition from Facebook and Facebook-owned Instagram. Snap’s average revenue per user is about $1.40, significantly lower than Facebook’s $5.97.

While Snap’s Q2 revenues were up 44% to $262 million, daily active users decreased for the first time by 3 million.

Khan is a former Wall Street trader and served as the company’s brains on all things ad tech. While Snap has been successful at quickly rolling out a suite of programmatic buying tools, from a self-serve platform to a measurement pixel, its transition to programmatic was accompanied by plummeting CPMs. And despite creating innovative ad units like AR lenses, Snap is slowly losing users outside of its core demo.

“The company has struggled, commercially and in terms of users, relative to earlier optimistic expectations that were widely held,” Pivotal analyst Brian Wieser told AdExchanger. “While user and usage trends are Evan Spiegel’s responsibility, commercial matters are Khan’s.”

With Snap’s stock down, its stock-based compensation is less valuable and therefore could lead to more high-level exits at the company, Wieser added.

“The latter point is something I considered as a particularly big risk for Snap at the time of their IPO, given how much they were using stock for compensation, and it may contribute to more departure risks.”