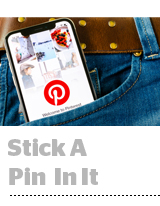 Pinterest made $272 million in Q1 this year, a 35% jump from the same period in 2019, but its net loss increased by $100 million because ad spend crumbled in March.

Pinterest’s global MAUs grew 26% year over year to 367 million, and the content users created and viewed were up by 60%.

The main problem for Pinterest is that its biggest brand verticals, omnichannel retail (aka brick-and-mortar companies) and CPG brands, pulled the brakes on ad campaigns when stores across the world closed and when many manufacturers sold out of merchandise.

“Even those advertisers began to experience supply chain difficulties that had various impacts on their appetite for spend,” Morgenfeld said.

Fast-growing categories, like DTC brands, which don’t rely on retail distribution, and gaming, were only marginal factors for Pinterest’s overall revenue.

Analysts expected better results from Pinterest after Snapchat and Facebook exceeded expectations during their quarterly earnings reports in April, according to a note by Pivotal Research analyst Michael Levine. But Pinterest’s “deep exposure” to traditional retail and CPG brands means it isn’t buoyed by the surge in ecommerce and app-install campaigns.

Investors on the call were concerned that Pinterest could also be in for a painful summer and fall, if typical tent-pole events like back-to-school, Halloween and Thanksgiving don’t pull the same ad budgets this year. Plus, Pinterest monetizes other life events, like wedding planning, which are on hold.

“To an extent, people are planning for how to home-school their kids, how to exercise in their home, how to teach themselves how to cook. Those are new events that we’re seeing some spend deviate toward and away from things like wedding planning and travel events,” Morgenfeld said.

However, capitalizing on new commercial dynamics in the post-COVID world takes time, since advertisers need to be added and acclimated to the platform. Morgenfeld cited NordicTrack as a brand that’s seized the opportunity on Pinterest this quarter.

Pinterest needs the shopper marketing budgets from CPGs and retailers to make their return.

Pinterest has partnerships with retailers where they commit to inventory deals ahead of time during big commercial periods (like back-to-school shopping or July 4th).

Retail ad platforms have very limited inventory, since they don’t own media, so they partner with Pinterest on pre-arranged inventory deals at certain rates. And those kinds of deals doubled since last year, Morgenfeld said, even as those same shopping brands and retailers halted campaigns this quarter.

“I wouldn’t want to over-index on what that means, because none of those deals are a contractual obligation,” he said. “But we’re still very actively involved with major retailers and seeing good intent there.”