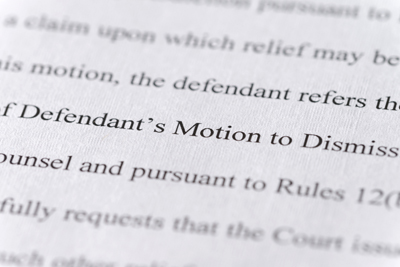 Google has been penning tetchy blog posts ever since Texas Attorney General Ken Paxton, along with a group of more than a dozen other state AGs, filed the first version of their antitrust lawsuit in December 2020 chock-full of anticompetition grievances related to Google’s advertising business.

Late last week, though, Google made its first legal move to try and get the state-led case tossed before it hits a courtroom. Last Friday, Google asked a federal judge in New York to dismiss most of the counts in the Texas suit on the grounds that the AG’s allegations are incorrect or don’t constitute anticompetitive behavior.

In its motion to dismiss, Google makes numerous arguments as to why the court should reject the Texas AG’s suit, and they can be summed up thusly: If you didn’t like it, you should have said something earlier, but we didn’t do anything wrong anyway.

You can read the full motion at your leisure, but here’s a taste: “US antitrust laws encourage, reward and protect … success – success earned through relentless innovation, early and extensive investment in research and development, vigorous competition and hard work – even if the Texas Attorney General and his allies do not.”

Well, guess that’s up to a judge to decide. But here are Google’s arguments in a nutshell.

One of Google’s main contentions is that if Paxton and his band of AGs wanted to sue, they should have done so sooner.

Because of what Paxton is suing for – injunctive relief as opposed to damages – Google argues that antitrust law sets a four-year statute of limitations from December 2020, which is when the case was originally filed.

But even if timing wasn’t an issue, Google contends that its product design changes were not anticompetitive and that its auction wasn’t rigged – regardless of whether Google had an information advantage, since antitrust law doesn’t require companies to “share [their] competitive advantages with rivals,” the motion states.

And Reserve Price Optimization was about helping publishers make more on their inventory in AdX auctions.

According to Google, Facebook never agreed to not support header bidding, and Facebook’s Audience Network wasn’t promised speed advantages or guarantees from Google that Facebook would win a certain number of auctions. (Google made the full text of its agreement with Facebook public last week.)

One of Google’s tried-and-true arguments against allegations of monopolistic behavior is that the ad tech ecosystem is jam-packed with competitors.

In a blog post back in September 2019 titled “The ad tech industry is crowded and competitive,” Google executive Sissie Hsiao pointed to Telaria and Rubicon Project (pre-Magnite), The Trade Desk, Index Exchange, MediaMath and OpenX as evidence that Google faces tough competition in the ad tech sector, also citing tech biggies like AT&T, Amazon and Adobe.

Google makes a similar argument in its motion to dismiss related to header bidding, which it says “is thriving.”

In a blog post, Adam Cohen, Google’s director of economic policy, cites Advertiser Perceptions research that shows most publishers currently use header bidding tech, whereas the suit claims that Open Bidding prevented rivals from doing so.

The argument here seems to be that even if Google tried to kill header bidding, it didn’t work. Seems spurious to this non-lawyer. You can’t absolve yourself of attempted murder just because the person didn’t die, but anyway …

Google also takes issue with one of the AG’s assertions that publishers are forced to use its ad server as a prerequisite to access its ad exchange.

Google says this isn’t true and that the allegation of tying – it can be illegal under antitrust law to require people or companies to buy products or services they don’t want or need together with the desired one – “is just another plea for Google to lend its competitors a helping hand.”

Of course, most publishers – the Texas suit claims it’s a whopping 90% – use DFP, and switching ad servers is an enormous pain in the neck. And while publishers can use a third-party ad server to access Google supply, only Google ad tech can use data from Ads Data Hub – the clean room for Google’s ad server data – for targeting, meaning publishers must tie the products together or lose out on valuable demand.

But hey, Cohen says in his blog post, “if a publisher wants to use our ad exchange with a different ad server, they are free to do so.”

The Industry Bristles From Latest Unredacted ‘Revelations’ In Google Antitrust Suit – But Does Anything Change? (Jan. 2022)