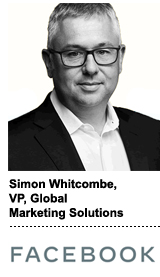 Facebook seems to exist within two alternate realities: The one in which it’s battered almost daily by a relentlessly negative news cycle, and the one in which advertisers, particularly performance marketers, never seem to put away their checkbooks.

That second reality could be under threat. Facebook has been sounding the warning on privacy-related “ad targeting headwinds” for more than a year, while at the same time the DTC brands that have been pouring budget into Instagram for the last few years are starting to diversify.

But although growth marketers eventually grow up and expand their channel mix, they still rely on social media platforms to find new customers, said Simon Whitcombe, Facebook’s VP of global marketing solutions, who spends most of his time working with DTC, ecommerce and travel brands.

They’re just getting smarter about how they spend there.

“As businesses become more mature, they pivot away from a cost-per-acquisition [CPA] model to more of a data-driven cohort or lifetime value model, and we help them do that,” Whitcombe said.

“Yes, we’re one of the largest users of our own platforms, but we also invest in things like broadcast and outdoor,” Whitcombe said. “Communicating across multiple mediums and platforms is part of a sophisticated strategy, and that’s true for anyone.”

AdExchanger spoke with Whitcombe about machine learning, creative optimization and why CPA isn’t the only metric marketers need to obsess over.

AdExchanger: What are the main challenges facing DTC brands from a marketing perspective?

SIMON WHITCOMBE: Many DTC businesses will naturally hit a plateau, which can happen for a variety of reasons. Sometimes, it’s when they move from focusing on growth to focusing on profitability. In the case of disruptor brands, once they’ve got the lower-hanging fruit they hit a plateau because of the complexity of their product. They need to tell their brand story in order to open themselves up to larger audiences.

Many of the brands we work with are very focused on CPA [cost per acquisition] in the early stages. The problem with that metric over an extended period is that it can become a race to the bottom. Over time, you end up acquiring lower and lower value customers. But most businesses get the majority of their revenue, maybe 60-80%, from the top 20% of their customer base.

We spend a lot of time working with customers on segmentation. We find that the partners which tend to thrive are the ones that bring data scientists on board early in the process to look at metrics, behaviors and actions that customers take in the first 30, 60 or 90 days that are predictive of lifetime value. Then they segment audiences in order to move off of a CPA model and onto a cohort model which allows them to bid higher in our auction for higher-value customers.

Are DTC brands spending at the same level on Instagram and Facebook as they were a few years ago? A lot of the larger DTC brands are starting to mature and diversify.

Whether you’re a Fortune 500 company or a new venture-funded DTC brand, you can’t spend the majority of your budget on a single type of advertising.

Many DTC businesses invest 80-90% of their marketing with us at the beginning, and as they mature, they bring more diversity and complexity into their strategy. It’s only natural to do that.

You also hear about the cost of Facebook ads going up, which is another reason DTC brands need to diversify their channel mix.

It’s fair to say that in 2013/2014, pricing in the Facebook auction was cheaper than today, but, then again, the machine learning we leveraged then was much less sophisticated than it is today. The platform itself has also changed quite a bit since then.

A few years ago, for example, leveraging Facebook and Instagram would have meant running lots of ads with overlapping audiences, often with different bidding strategies against each audience and with most of the spend overwhelmingly in Facebook feed. But if you do that today, you’re not going to see the same results you’d have seen back then.

The partners that consistently see success with us now are the ones that are leveraging very broad audiences that let our machine learning have the biggest audience possible to do its thing, whether that’s optimization or reaching someone with more efficiency on a different surface, like through Audience Network or Stories.

What optimization levers do advertisers have at their disposal as the algorithm does more and more on its own?

It’s about the creative. There’s a growing democratization of media and new surfaces, like Stories. Ephemeral content means that marketers don’t need to have super-high production value for everything. Advertisers that take a more authentic approach using things like Boomerangs or shooting creative on their iPhone are actually seeing more success, because they’re producing a lot of content.

What has to happen for Stories to monetize at the same rate as news feed, and can it ever achieve the same sort of scale?

It’s true that Stories is not a news feed environment. It’s a very different kind of surface, and our partners are experimenting with it to understand how to use it best. But we see a lot of opportunity there.

It reminds me of something we saw during the early days of Instagram, when performance marketers were struggling to find traction there. There was no internal browser before we started running ads, and users weren’t used to clicking out.

But some ecommerce advertisers started to look at the one-day view metrics for their ads on Instagram, and realized that people were actually visiting their sites – just not right away. Advertisers that incorporated view into their attribution saw success sooner and had a competitive advantage for a period of time on Instagram.