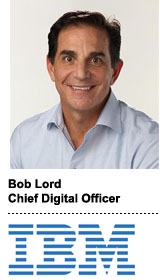 “What I’ve loved doing throughout my career is helping a company pivot,” Lord told AdExchanger.

That career spans a long stint as global CEO of Razorfish followed by a tenure as AOL’s president.

“At Razorfish I [pivoted] about five different times through 15 years,” he said. “It became a commerce company, a media company, an experiences company. And before I went to AOL, it wasn’t known in the programmatic media space.”

His remit at IBM is to open the company’s products and services to the developer and startup communities. And a core part of Lord’s strategy revolves around the artificial intelligence (AI) engine Watson.

After Watson burst into the public eye by winning “Jeopardy,” IBM seemed set on building and selling Watson-powered applications. That initiative has evolved.

Now, IBM is actively pushing the cloud platform Bluemix, where developers can access IBM infrastructure, APIs and services – including Watson – to build applications. So now developers own and operate the apps, but use IBM’s platforms to power them.

Lord spoke with AdExchanger about IBM’s strategy shift and how it will affect the world of paid media.

AdExchanger: You mentioned opening up IBM to entrepreneurs and startups. Where are you now and what do you still hope to do?


BOB LORD: During any transformation effort – like at AOL – it takes almost six months to educate a company about what you’re trying to achieve. We’re fundamentally changing the way we do product development. How people think about IBM and the users accessing IBM’s tools are very different than what it was 11 months ago.

A kid from Stanford pulled down the Watson APIs to create an app called Do Not Pay, which gives people advice on whether or not they should pay the parking ticket they got from the city. H&R Block launched a product for tax season with Watson.

All of these solutions are being created because the APIs on Bluemix are available to use in the context people want to use them.

Why is IBM transitioning in this way?

People want to try your product just to see if it’ll have an impact. They want to taste what Watson will give them versus committing to a $2 million engagement. By exposing the APIs, you can taste Watson and sample its impact. Then you upsell.

My job is to get that ramp-on strategy in place. We have some success cases. One developer playing with our Watson Conversation tool embedded it into the Staples Easy button so you can talk to it. And he did that without any IBMer interacting with him.

Once they got to the point where it needed to be enterprise-ready – secure, that it could tie into an order management system – they called IBM’s Watson team and our [Global Business Services] organization.

Where do IBM’s marketing tech products, like Silverpop and Unica, fit in?

The marketing cloud will be Watson-enabled and have those separate components to go up against the Adobes of the world.

[Editor’s note: IBM Marketing Cloud is now called Watson Marketing and is housed within the Watson Customer Engagement unit. You don’t need an AI engine to see the pattern here.]

We will also fuel partners with Watson technology. So IBM will have its own product set, but it will also provide components like Watson, Cloud or Bluemix in other people’s solutions.

Does IBM need to be selling to marketers or just to developers?

Both. The marketer has more IT spend than before, but I need to get developers excited about Watson. If you’re a CMO or CIO, you turn to your developers: “Hey, tell me about Watson versus Google’s AI tool. Which should I use?”

You can’t think of an AI solution as a chat bot, which some of our competitors do. AI is a cognitive platform solution. The AI world is in feature-set mode, but you need to think about your platform strategy.

How is Watson different from other enterprise AI solutions like those offered by Amazon, Google or Salesforce?

In the five years [since Watson won “Jeopardy”], we’ve used Watson to do two things: augment decision-making in health care and use Watson to help predict potential cyberattacks, based on trends in the market.

This is different from Alexa, which makes a conversation. It doesn’t speed up your decision-making, nor does it predict anything.

What about Salesforce’s Einstein, which is diving into the same space as IBM?

Salesforce will always be a strong competitor, but we’ll be able to get more Watson APIs out to the market faster. Our challenge is making it more accessible to people, so they can actually do the analysis and get information served up quicker. Einstein will be on that journey also, but it will take them longer to get there, while we already have it.

Will Watson directly power marketing executions, or will it stay in the intelligence and strategy phase?

We have Cognitive Ads out of the Weather Co., where Watson helps optimize bid requests on the programmatic platform and swap creative out, based on what we know about the customer. We’re working with some agencies to scale that Watson intelligence further.

How does that gel with your partnerships with MediaMath and Rocket Fuel, who both have AI to optimize bid requests?

It’s complementary. I’m not building a DSP. I’d never do that. It doesn’t make any sense for me to do that. We’re informing the MediaMath DSP with more data from Watson to make better decisions. And we use [AOL’s] Convertro to optimize the campaign in real time.

How do you inform what MediaMath can do? It has its own proprietary intelligence, so what features is IBM enabling?

Also, our revenue model is not based on advertising dollars. If we use data, that’s all owned by the client.

Some competitors own that data and use it for other advertising and monetization purposes. We’re not conflicted like some other AI solutions, which are there primarily to collect more data for their core advertising business