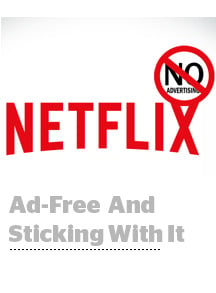 Seriously, folks, Netflix has no intention of monetizing with ads, ever.

Netflix CEO Reed Hastings even referred to advertising as a form of exploitation on the company’s full year 2019 earnings call on Tuesday.

“We want to be the safe respite where you can explore, you can get stimulated, have fun and enjoy – and have none of the controversy around exploiting users with advertising,” Hastings said.

Hastings was just as emphatic back in July, when he first put to rest rumors that Netflix might introduce ads as another revenue source.

In Netflix’s view, remaining ad-free is a selling point, and wresting marketshare from Facebook, Google and Amazon wouldn’t be a picnic and, Hastings said, would also require Netflix to become a collector of large amounts of user data.

“We think with our model that we’ll actually get to a larger revenue, larger profits [and] larger market cap because we don’t have exposure to something we’re strategically disadvantaged at, which is online advertising against those Big Three,” Hastings said.

To “keep up with those giants,” he said, Netflix would have to spend heavily on implementing an infrastructure to support targeted advertising and engage in large-scale tracking.

Netflix doesn’t collect personal user info other than viewership-related data – such as search history, ratings and when someone is watching – which Netflix uses to train its personalization and content recommendation algorithm.

“We’ve got a much simpler business model,” Hastings said. “We’re not tied up with all that controversy around advertising.”

But although Netflix doesn’t have advertising and doesn’t intend to, there is an opportunity for brands to work with Netflix in other ways, including in-show product placements, brand partnerships and show-inspired consumer products.