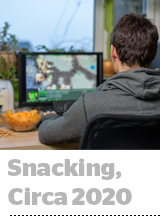 Video games have proven their marketing mettle during the coronavirus crisis, with people stuck at home and live sports and TV frozen in limbo.

The latest example of that trend comes from Doritos, which is teaming up with Twitch to host a series of esports tournaments over the course of the year.

The Doritos Disruptor Series, as the games are being called, will host 10 tournaments across five different video games, with the help of five popular Twitch streamers. The first tournament was hosted last weekend by Tyler “TeePee” Polchow, for the game Call of Duty: Warzone. The rest of the events and creators have not been disclosed.

Doritos was already planning to do a marketing sponsorship with Twitch this year, said Leslie Vesper, senior director of marketing for Frito-Lay, Pepsi’s snack brand.

“Partnering with them makes a ton of sense now more than ever before,” she said.

Despite the strong audience numbers and engagement, non-endemic brands (i.e. brands that don’t sell video games, consoles or gaming hardware) are reluctant to do more than “dip their toes” in video game livestreaming, Vesper said.

Video game livestream marketing does require more risk acceptance, she said. Doritos manages that risk by briefing influencers it works with on brand guardrails and by working with Twitch as an intermediary that can source relationships with popular streamers who are pursuing sponsors.

“We’ve done the test-and-learn phase, considering our long history in gaming,” she said.

Twitch provides sponsors with metrics including “concurrent viewer counts” (the total live audience at any given time) and has a panel of users for post-campaign research such as surveys to measure recognition and brand equity, said Lou Garate, Twitch’s head of global sponsorship sales.

Vesper said Doritos approaches video game marketing as a long-term brand equity play among a young consumer base that sees relatively few ads online or on TV, and distrusts the ads they do see.

Reaching teens and twenty-somethings, particularly young male audiences, was already getting more difficult, she said. They’ve retreated to ad-free streaming entertainment, aren’t watching linear TV and in digital media they make up a disproportionate number of Americans who block ads.

Doritos isn’t the first sports sponsor brand to shift into esports during the pandemic.

The metrics are enticing, for any brand that can stomach the risk of video game livestreaming. TeePee, the Twitch influencer who hosted the first two Doritos Series tournaments, broke his record for streaming viewers in a week, thanks to the boost, he wrote in a tweet on Sunday.

“There is a higher risk level vs. something produced or canned,” Vesper said. “But this is the type of content our consumers demand, so we lean into that and take a bit of risk.”