With iOS set to get a lot less measurable, developers are considering putting more of their performance budgets into Android.

The impetus is Apple’s move to start requiring an opt-in for its proprietary advertising ID, the IDFA, beginning with iOS 14 in September. Without ready access to the IDFA, apps are limited in their ability to track which users click on what ads and to see if those interactions lead to an install, purchase or some other downstream action.

“The common impression that we’ve had from talking to clients is that a substantial lack of clarity around measurement on iOS may cause a platform-wide spend freeze,” said Paul Müller, CTO and co-founder of app attribution provider Adjust. “At least until the situation is clarified.”

By the same token, certain clients have ramped their spend on iOS throughout Q3, said Phil Crosby, chief product officer and co-founder of mobile DSP Liftoff.

Many app advertisers see the Android ecosystem as a safe space amid the iOS uncertainty.

Although most agree that Google will eventually follow in Apple’s footsteps, the Google advertising ID (GAID) is currently alive and well on Android.

On Zynga’s Q2 earnings call in early August, for example, the company’s CEO, Frank Gibeau, told investors nervous about the coming IDFA change that “we … still have Android and other platforms that are continuing to operate in the context that we’re currently comfortable with.”

But avoiding iOS isn’t really a strategy, said Bryan Karas, CEO of performance marketing and creative agency Playbook Media, and would only be a short-term fix.

“I understand why people would want to go over to Android from iOS, because you can measure it, and we’ve heard murmurs about that happening – but I think it’s a little lazy,” Karas said. “Like, let’s just do what we did before, because we’re afraid of change.”

The challenge is that performance marketers need to justify their spend, especially if they’re operating on thin margins, said Mike Brooks, SVP of revenue at GroundTruth-owned weather app WeatherBug.

In the current setup on iOS, a casual game, for example, has enough visibility to know how much it costs to acquire a user and how much revenue that user will generate. Whatever revenue comes in above the cost of acquisition is then almost immediately pumped back into new user acquisition.

Without the IDFA, attribution will happen through SKAdNetwork, which purposely obfuscates and aggregates the reporting data. While advertisers will have a sense which cohorts are performing, they won’t have enough granular information to easily price impressions.

“That doesn’t mean iOS doesn’t work, it just means that if the economics are less clear it results in a cost to the advertiser,” Brooks said. “Margins get smaller, because you can’t see what’s happening.” 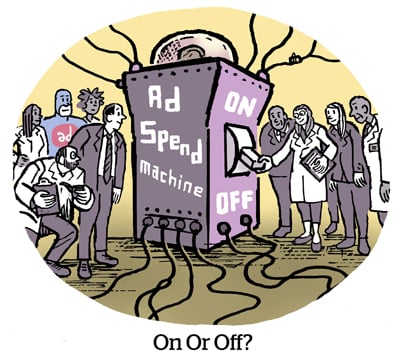 But app marketers are exceptionally good at figuring out which levers to pull to juice performance.

Social networking app IMVU, for instance, automates its budget allocation decisions for all of its advertising partners across both iOS and Android, said Lomit Patel, IMVU’s VP of growth.

IMVU is also looking into ways to drive its iOS business through probabilistic modeling and media mix modeling, he said.

For ecommerce app Joom, return on ad spend is the only North Star it uses for apportioning its acquisition dollars, said Nathan Levin, the app’s UA manager.

“For some time now we’ve been allocating budget solely based on whether or not our paid media has been driving positive ROAS,” Levin said. “As long as our spend continues to yield positive ROI, then we will continue to spend on both iOS and Android accordingly.”

But Levin anticipates that numerous developers will shift their budget from iOS to Android, creating significantly more competition – and increasing the cost of Android CPMs – at least throughout this quarter and into Q4.

“We’re not going to force the issue and buy below our target ROAS,” Levin said. “[But] mercifully, Q4 and the holiday season has always been very kind toward ecommerce, [and] as a result, this should keep our Android spend relatively stable as we transition from Q3 to Q4.”

This is a test

Performance advertisers are also getting scrappier with their test-and-learn regimens.

A growing number of developers are turning to Android as their primary OS for testing and soft launches, said Liftoff’s Crosby.

“They can port what they learn on Android over to iOS,” he said. “It’s not as if you can’t learn on iOS with iOS 14, but a lot of changes are happening there and Android, at least for now, is staying the same.”

And since Android enables more granular measurement data, there’s a lot that advertisers can learn in that environment about user behavior to scale their marketing strategies, said Adjust’s Müller.

“By allowing advertisers to see their full campaign performance and optimization,” Müller said, “Android could become the place for innovation and creative optimization.”