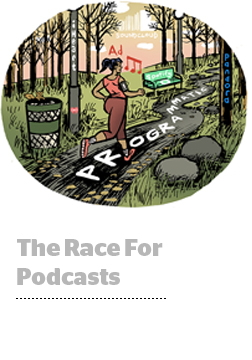 The podcast industry is growing, and audio giants want a piece of it.

Twenty-six percent of Americans listen to podcasts every month. These people are young and well-educated and have higher-than average household incomes, according to Edison Research. They’re also loyal and engaged, on average consuming seven podcasts per week.

Ad dollars are following. Last year, the IAB said US podcast ad revenue would grow 85% to hit $220 million by 2018. The space historically was funded by direct-response advertisers, but brand advertisers are starting to buy podcast sponsorships too.

Podcast technology, however, has lagged, both for consumers and advertisers.

For consumers, Apple, whose dominant podcast app captures around 65% of all listening, doesn’t make it easy to discover new content.

“Podcasting is compared to how the internet looked at the end of the ’90s – it’s very directory-based,” said Oskar Serrander, general manager at podcast analytics company Acast. “People are listening to more podcasts than they did a year ago, but how can we find better ones?”

On the monetization side, the industry isn’t yet programmatic. More than half of all podcast ads are dynamically inserted, or targeted to audiences and served in real time, according to the IAB. But podcast advertising isn’t bought or sold in a programmatic auction because episodes are progressively downloaded from an RSS feed, rather than streamed in real time.

Digital audio and broadcast radio companies see an opportunity to fix the podcast experience for users by making it look and feel more like digital audio, where content is recommended to listeners before they know they want it. Through recommendations, these platforms can open more inventory by making back-catalog episodes easier to find. They can also collect more data on listening habits and share that with advertisers.

If they can steal listening share from Apple by doing so, they can fix some of the issues that plague podcast advertising today – and capture share of a growing market.

“In the near term, you can expect that we’ll begin to add more podcast content to our platform, but our long-term plan is much more ambitious,” he said. “Make that content far more relevant, discoverable and shareable than it has ever been.”

Pandora and Spotify have the technology, infrastructure and data to reinvent the listener experience by applying algorithms to recommend content for users, like they do in music. Pandora is building a podcast genome, similar to its music genome project, which analyzes podcast content to make better recommendations to users, said Oscar Celma, head of data science at Pandora.

“We know a lot about our listeners,” he said. “To solve podcast discovery, we’ll use a combination of human experts and AI to understand what the episode is about and target users based on proprietary segments.”

Radio giants iHeartMedia and NPR are also establishing themselves as podcast destinations, backed by popular radio shows and hosts with fan followings.

“[Our radio hosts are] creating their own podcast content,” said Chris Peterson, SVP of podcasting at iHeartMedia. “That conversation is the most powerful because of the reach those radio hosts have and the loyalty.”

Bring in the money

Today, advertisers have access to limited data about whether their ads were heard on podcasts. Apple, which captures the lion’s share of listening, released a long-awaited analytics tool last fall, but it only aggregates listener data on a per episode basis.

While that tool is helpful for publishers to understand how users are engaging with shows overall, it’s not granular enough for targeting or measurement that proves an ad’s efficacy.

“On the advertising side, it’s about using [listener] data to make better-informed decisions on who the listener is and serve relevant ads to them,” Acast’s Serrander said.

Pandora is still growing its podcast portfolio, but it’s studying the listener behavior of its users as they interact with shows. And it plans to share that data with advertisers, said Blair Martin, product manager at Pandora.

“The download is a measurement that’s stuck in the ’90s,” she said. “[Publishers] don’t know where their audiences are listening or if they downloaded an episode, how far they get through the content. These are all things that come for free with Pandora.”

Fixing the user experience can also open more inventory for buyers in the back catalog, said Bryan Moffett, COO at National Public Media, NPR’s sponsorship arm. Today, podcast sponsorships are stitched into old episodes. But as older episodes become easier to find with better content recommendation engines, buyers have an opportunity to reach a loyal audience.

“Traditional buyers view the back catalog as second class,” he said. “I’d argue that’s one of your most engaged, interested audiences that have found your podcast and like it so much they’re digging back in the archives to listen to everything that’s ever come out.”

On its Q1 earnings call, Pandora’s Lynch said the company plans to leverage AdsWizz technology, which it acquired in March, to “improve the monetization of non-music content.” Podcast publisher and tech company Panoply also operates a programmatic exchange Megaphone Targeted Marketplace, which isn’t a real-time auction, but offers the ability to buy audiences across podcast shows rather than contextually.

While the technology is there, many publishers in the US are still hesitant to sell programmatically for fear it will compromise the listening experience, Serrander said.

“Programmatic is getting into more of the discussions with agencies and marketers,” he said. “But podcasting needs to come around to the idea that creative can still be intact and the podcast experience can still be great even though something is served programmatically.”

As for better measurement, platforms like Pandora, Spotify, iHeartMedia and NPR are willing and able to share more granular data back to buyers. But until they steal significant listening share away from Apple, measurement will remain challenged.

“Buyers are going to be interested in having more listeners that can be measured end-to-end,” said Erik Barraud, VP of product at AdsWizz. “But right now, everything from the long-tail consumption end is on Apple.”