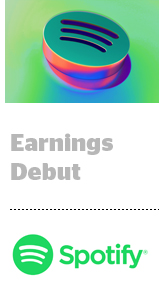 In its first earnings report as a public company on Wednesday, Spotify said its programmatic revenue was up 94% year over year. It didn’t give a figure, however.

“We’re seeing super fast growth of programmatic,” Spotify CFO Barry McCarthy said on the call. “That’s coming principally from developed markets, with the US far and away the largest and most profitable.”

But direct-sold sponsorships make up the majority of Spotify’s ad revenue, despite programmatic revenue nearly doubling year over year. Spotify’s self-serve platform, launched in September, is driving programmatic growth by onboarding thousands of advertisers, the company said in a release.

Spotify recently upgraded its free tier to give users functionality closer to that of its paid tier, like the ability to skip songs and listen to certain playlists offline. While some investors were concerned that elevating the paid tier would deter people from paying for subscriptions, Ek said more engaged users on Spotify are historically more likely to convert.

“It’s been a good business decision continuously to enhance the experience for our [paid] customers,” he said. “We have a very long track record of that.”

Spotify’s total revenues for Q1 were up 26% year over year to $1.36 billion. Monthly active users grew 30% to 170 million. Within that bucket, ad-supported listeners grew 21% year over year to 99 million and Premium subscribers grew 45% to 75 million.

But the company is still losing money, with almost $50 million, or 4% of total revenue, marked as operating losses. And its Q2 revenue outlook is $1.3 to $1.4 billion, potentially below analyst expectations of $1.4 billion.

Spotify’s stock dropped 10% in after-hours trading. Still, the company is confident in its mission to grow the music industry overall.

“Radio is a massive business that’s now moving online,” Ek said. “Spotify has a significant amount of those ears. We think we can make the system more efficient, which will enable us to sign more artists and increase the share Spotify receives.”

The streaming platform sees opportunities to expand ad revenue by adding more spoken-word audio, like podcasts, to its platform. It also plans to grow revenue beyond advertising by using its data set on listener preferences and habits to help artists and labels market their work.

“There are huge inefficiencies in the way acts are being taken to market today,” Ek said. “Because Spotify already sits on the data [on] consumers and their preferences, we can play a role in connecting more artists with more fans and capture share of that too.”

As for competition like Apple Music, which grew its subscribers to 38 million as of March, Ek said there’s enough growth to capture in the streaming market for more than one leading player.

“We don’t think this is a winner-takes-all market,” he said. “We think multiple services will exist in a growing market. We’re just interested in growing that market and capturing share of it.”