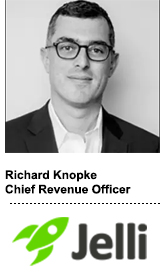 A 20-year digital media veteran, Knopke was previously CRO at video supply-side platform Genesis Media and SVP of sales at USA Today. He was also national VP of sales at Tremor Video (now Telaria) during the company’s IPO.

“We’re still maintaining our clients on the traditional side, but we’re expanding what we’re doing to brands directly,” he said. “We know that change can happen faster by going to clients direct.”

Jelli, which has its DSP and ad server installed in 2,300 radio stations around the country, automates the traditional radio buying process by allowing buyers to target audiences, upload creative and send it to radio stations’ ad servers in real time. Stations can then run the creative based on the brand’s targeting parameters and send back real-time reporting.

That’s a lot faster than the old days of radio, when the buying process could span months, and when brands didn’t have any way of measuring whether their ad was heard by its intended audience – or anyone at all. But most brands don’t know about programmatic radio or think about including it in their plans to take programmatic in-house, Knopke said.

“I don’t think they know that’s out there right now,” he said. “Their focus has been on digital. You hear so much more about programmatic TV. It’s up to us to evangelize how brands can rediscover radio.”

Brands, for example, don’t realize that even though radio is a traditional medium, it reaches 245 million people in the US every week – more than Google and Facebook, Knopke said.

“To buy that in an automated way is incredibly powerful,” he said.

But as Jelli pitches brands, it will have to make sure not to alienate its agency partners in the process.

“We have to take a dual approach,” Knopke said. “We’re more than willing to go in with an agency to educate their client about what’s possible. Some of the best meetings I’ve ever had have been working side by side with agencies to educate clients.”

Agencies are waking up to innovation in the audio space, even around broadcast radio. They like the efficiencies Jelli’s platform brings to the buying process, like the ability to schedule buys within hours of the ad’s run time and receive make goods from stations quickly.

But approaching agencies can feel like entering a turf war between traditional broadcast and programmatic or digital buyers.

“There are going to be people on the traditional side who get it and want to embrace what we’re trying to do. You're seeing that connection now with streaming as well,” Knopke said. “That’s up to the agencies to figure out internally.”

In addition to expanding its buy-side business, Jelli is also trying to ink deals with digital audio and podcast publishers to expand its inventory and be the default audio planning and buying interface for the industry.

“Audio is hot in every way shape or form, and we want to be known for that,” Knopke said. “We’re talking to all of the major players in the space to see where we would fit in.”