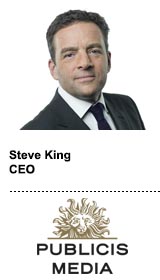 Within the context of Publicis Groupe’s broader restructure, Publicis Media was born to simplify the group’s media offering while leveraging a more modern definition of scale.

“Although it’s become so much more complex, media has always been about scale and insight,” said Steve King, CEO of Publicis Media. “We weren’t leveraging that scale effectively.”

Publicis Media debuted in late 2015, just months before the ANA and K2 released a scathing investigation into agency nontransparency. It was a fraught environment, but Publicis Media had a clean slate to launch with positioning around trust, King said.

“The timing was fortuitous because we set up a new business,” King said. “We don’t have investments in ad tech, barter companies or positions in principal media, so that positioning around trust was timely, credible, deliverable and differentiating.”

Still, as with any major business overhaul, there are challenges. Chief among them are attracting affordable tech and data-savvy talent to media-buying agencies and retaining that talent during bouts of consolidation and restructuring.

“Churn is a huge issue for us,” King said. “Amongst young millennials, churn is the most concerning. We’re in a highly competitive sector.”

Although it’s been a long road for Publicis, the transformation is far from over.

“When people think about transformation, they think, ‘The butterfly is going to come out of its cocoon, and it’s done,’” King said. “The reality is transformation is ongoing.”

He spoke with AdExchanger ahead of his appearance Thursday at AdExchanger’s Industry Preview conference.

AdExchanger: What has been the biggest challenge in creating Publicis Media?

STEVE KING: It seems to have gone much better than I would’ve thought. People have internal rivalries. I thought this management group would fight amongst itself. I thought everyone would kill each other.

That hasn’t been the case. Everyone understood the model was for the betterment of our clients and our business. The management team was made up of people from each of the agencies, so it wasn’t one taking over the other.

Clients want simplification. Our business is growing because our clients are lost. Every one of their businesses is disrupted. There’s not a partner who has all of the solutions, but now we can access media, content, data and technology in a really powerful way.

When Publicis broke down VivaKi, it was a bumpy transition with a lot of talent loss. What have been the challenges in building Publicis Media from that legacy?

The decision to put programmatic into the account group was audacious, and it did lead to some staff exodus. But our programmatic business is growing exponentially. We see a strong line of growth with real positive metrics.

It also built up accountability and transparency. We’ve inculcated new skills. Some acquisitions we’ve made, like RUN, help us scale that programmatic solution. That team is still with us.

How would you grade your traditional media agencies’ progress in mastering programmatic? Are they still mostly buying TV?

TV is still a key component, but the overall majority of investments is digital. Our clients are making that transformation most rapidly. At Zenith, we would not have had this modern approach if we hadn’t had a client like Verizon.

The media agencies have been entrepreneurial. I started Zenith 25 years ago, and it was a media-buying-only business. We still do media buying, but we’ve got technology and software design. We have people writing code and building algorithms. It’s such a diverse business.

How difficult has it been to recruit technical talent to your media agencies?

This is where Sapient has huge value. We have the same client connections. A lot of our business lends itself to STEM application. That will definitely be an area where we expand.

[Recruiting in India also gave us] access to different talent. There are 10,000 STEM graduates there well qualified in building product design, experiential and customer solutions. That was talent we could scale more quickly as extended solutions for the US team.

Publicis Groupe recently rolled out Spine as a central data stack for its agencies. How are your media agencies leveraging that platform, and how central will it be to their work this year?

We aggregated skill sets across data science, engineering and analytics to produce a common platform. Many [of those people] sit inside brands in different geographies, but if we scale it, it’s much more powerful than people building locally across different countries.

It was only slightly reluctantly that we announced Spine in November, because it’s such a competitive advantage for us. But at some point, you’ve got to communicate it. Now it’s become far easier to migrate talent into this area because they know what it is.

Your competitors have very similar solutions. How is Spine such a competitive advantage?

We’re building these individual IDs at scale. The clients own that data. It’s not some black box pooling data to benefit ourselves. This is something we’re customizing for clients. But time will tell which is the strongest platform.

It’s been two years since the ANA report came out. What steps have you taken to regain trust with your clients?

Trust in our organization is better than ever. Twenty-First Century Fox, Lowes, Southwest Airlines and Molson Coors all appointed us primarily because of their confidence in our transparency. That’s a pretty good endorsement. About 35 of our clients did really deep audits. From all of those, we got a clean bill of health, and all of those clients are still with us.

Where we have seen a change is clients now go into contract stipulations before the review. Clients had concern about media agencies not just because of their practices, but because the language they used was so confusing. We’ve said we will be as clear as possible. It’s not meant to be clouded so that there are hide-behinds. If you want someone to trust you, you have to speak plainly.

As a media agency, how do make sure clients trust that you’re holding walled gardens like Google and Facebook accountable? What changes do you need to see from them this year?

We took a strong initial stance on viewability. We’re pushing for better standardization across walled gardens. And on brand safety, I think both companies, when they look back, will be disappointed with their response. The changes they’re making to the algorithm are positive, but it’s also in reaction to concerns about social platforms. We need to have zero tolerance.

But clients are stills spending so much money on these platforms. That doesn’t really seem like zero tolerance, does it?

Yes, they are, but a lot of clients are disquiet. If you have inappropriate content, even if one person sees it and it generates one cent of revenue, it raises questions about using those platforms.