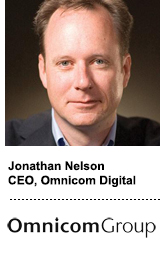 But are these deals too focused on owning data, rather than using it to derive insights?

“You have to look at broad groups of data to understand consumption,” said Jonathan Nelson, CEO of Omnicom Digital.

Rather than purchase a data broker, Omnicom has taken a homegrown approach to data, starting with the launch of Annalect a decade ago. Omnicom licenses data from different providers and builds technology – such as its audience platform Omni – to source insights and activate them across media channels.

“The industry is having the right conversation, but it has stopped at ‘data is good,’” Nelson said. “Data can be good, and it can be a colossal waste of time, money and effort. Relevant data is good. High-fidelity, quality [data] is a discussion we need to have.”

High-fidelity data can be found most abundantly within walled gardens, which is why Omnicom worked closely with Google to launch Ads Data Hub, a clean room environment where advertisers can match their data sets to Google’s user data.

Google reiterated its ADH launch statement that ‘Omnicom Media Group helped to define the solution and has seen significant value from both the amount of data available through Ads Data Hub and the broad set of analyses and custom queries that are possible.’

“It allows us to start to orchestrate across walled gardens and work with them on their own terms,” Nelson said.

Nelson spoke with AdExchanger about Omnicom’s data strategy heading into 2020.

AdExchanger: Why doesn’t Omnicom need to buy a data company?

JONATHAN NELSON: We chose to take a more open approach, where we compile data by licensing multiple sources. We don’t need to own it to get the insights.

Not only did we perhaps save billions of dollars by spending tens of millions slowly over the past few years, but I’m not changing my story every six months based on whatever is in fashion. I need to see data for everyone across the world, not just the company that I bought.

Regulation is inevitable. Personally, I’m surprised it took this long. We just celebrated the 25th anniversary of the banner [ad]. This has been happening for a while.

Consumer privacy is not just regulation – it’s a right. We need a clean, well-lit space to do our craft. The more we demystify, that’s a good thing for advertising.

We can read the regulation, but how it’s implemented is yet to be seen. When GDPR got implemented, you had to accept cookies. Most people accept. It’s an interesting vote in favor of advertising: I am willing to give up some privacy and be targeted to get the content. That’s the trade, and I think consumers understand what’s going on.

Have consumers become averse to that trade-off?

If you are averse to it, don’t click accept. You have a right to not be advertised to. You can clear your cookie cache. You can use a pop-up blocker. If you really feel that strongly, I don’t want to target you. If you’re not going to consider my product, why am I wasting money?

I don’t think it’s fair for the sell side. Everybody wants your content but they don’t want to give you their attention? That doesn’t seem fair.

One of the results of privacy law has been the rise of walled gardens. Is a more closed ecosystem the trade-off for privacy?

Walled gardens are a fact of life. They are not going away. Regulation in some ways will make the walls higher.

If the decisioning happens within a walled garden, I’m not going to ask them to export the data. Let’s create a clean room where I can protect my clients’ data, you can protect your users’ data, and we have a neutral space to do the match. We do that across all of the walled gardens. We have solved a particularly thorny technical solution with Ads Data Hub.

I’m very proud of Ads Data Hub, by the way. Omnicom was the group that did it.

I don’t think many people know that.

People look at it as Google. We invented it. [A Google spokesperson disputed this claim and said the product concept and design for ADH came from Google.] Now our peers are using it, and it’s an increasingly robust [solution]. It’s a great example of the craft and the technology coming together.

How is Omnicom dealing with audience fragmentation on TV?

There isn’t an easy button. You don’t need a crystal ball to say what happened in print and radio is going to happen in television. How do you put Humpty Dumpty back together again? You can buy the Super Bowl. If you have $5 million, that is the easy button. But that’s not how the world is the other 364 days a year.

It goes back to data compilation. We get ACR data and viewer behavior data from Inscape. A lot of TV viewing happens on mobile. If you really want to see what’s going on, you can’t rely on a single company or data set, because nobody has it all.

First you built Annalect, then Omni. What’s next on Omnicom’s tech road map?

It’s about throwing a vast majority of the data on the floor, because there’s no signal in a lot of it.

We’re moving toward activation with AI. We’ve evolved our platform to have machine intelligence. You teach the machine to find needles in the haystack, which allows us to drive outcomes. Because we’ve been at this for a decade, we’ve learned a lot about teaching people how to use these tools and evolve them so they’re easier to use.

Have you cracked the data-driven creative piece yet?

No. We’re training thousands of people to use creative inspiration tools. This isn’t quantitative data analysis. This is about culture and finding things they can relate to.

The creative director doesn’t need to know how to build the audience, but [they] can look at YouTube videos and get a good idea of what an audience is interested in. [We built] an AI-enabled search engine that sends signals about culture to inspire [creatives] to come up with better ideas faster. [We] put a predictive model on it. This is having a profound impact on the way we work.

We’re hiring and re-skilling people. People phase out, people self-select. They say this is not for me, or they realize wow, advertising is cool. I can’t tell you all the times I sit down with tech companies and they say, “I can’t believe I’m having this conversation with a Mad Man.”