What do people do when they’re mostly stuck at home? They stream, they game and they eat pizza.

Papa John’s saw double-digit growth in June, with sales up 24% year over year in North America and 5% internationally amid the ongoing pandemic.

To staff up fast, Papa John’s did something unlikely during the widespread quarantine – it turned to digital out of home. The brand partnered with Firefly, a startup that places digital ads on top of ride-share vehicles, to advertise to job seekers in cities experiencing high unemployment rates, including San Francisco, Los Angeles and Dallas.

Papa John’s looked to its franchisees in Korea, China, the United Kingdom and New York City as bellwethers for the increased order volumes it could expect to see in the rest of the United States, and correlated that with data from its recruitment tracking system.

“With this data we could see the areas of biggest need from a DMA level and even down to an individual store level,” said Melissa Richards-Person, SVP of brand at Papa John’s. “From there, we were able to say, ‘I think we’re going to need a full-court press to make people aware that, first of all we’re open and an essential service and, secondly, that we’re hiring.’”

Richards-Person spoke with AdExchanger about how Papa John’s has been approaching product launches, marketing pivots – and headline-grabbing ad boycotts – in the age of the coronavirus. 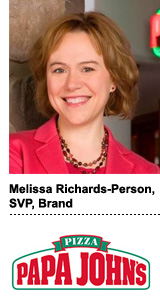 AdExchanger: How do you let your customers know “we’re there for you” without coming off as forced or disingenuous? People love pizza, but it’s also just pizza.

MELISSA RICHARDS-PERSON: We know how to check ourselves. We call it “the pin in the balloon.” If something starts to feel preachy or self important or like we’re reaching a little too high, someone will stop and say, “Hang on a sec, it’s pizza.”

On the other hand, we also recognize that we play a role in the community as an employer and that our individual franchisees do so much for their own communities. We’re a collection of independent business owners.

How does that come through in your marketing?

We’re staying focused and having honest conversations about what we can provide to people without the over-dramatic music, the sepia-toned background and the black-and-white type. For example, we had two spots using primarily user-generated content showing people in their everyday lives, from families at home to our team members going out there to deliver pizza to frontline workers. We let people show what they were doing using their own content through their own lens.

Papa John’s has had a few challenging years following founder John Schnatter’s high-profile departure. How would you describe the post-Schnatter marketing strategy?

It’s finding unique ways to celebrate how much we all love pizza. It’s about as simple as that. And we think this shows in the product innovations we’re bringing forward, the way our franchises are there to support communities with donations and in the way we’re trying to innovate the customer experience with things like the Papa John’s rewards program.

Shaquille O’Neal [who joined Papa John’s as a brand ambassador and board member in 2019] said it best: “Everyone loves pizza, so pizza should love everyone.” That is where we’ve moved to. 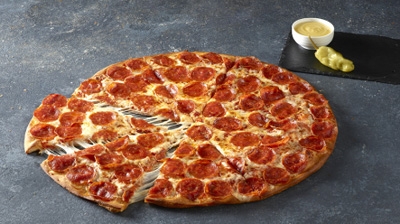 With that in mind, is Papa John’s planning to join the Facebook ad boycott?

This is a conversation we’re going to continue to have for the next few months. We’re developing a framework that will allow us to approach situations like this, but also be consistent. There are a lot of things we’ve got to consider, and we want to make sure that anything we do is fair and thoughtful. We also have to think about our team members and small business owners.

Papa John’s just launched a new product at the end of June, the “Shaq-a-Roni.” What’s it like to toss together a product launch right now?

From a creative standpoint, everything was shot remotely. We found families to feature through our partner, the Boys & Girls Clubs of America, and we were able to brighten their day with a visit from Shaq, who was using a camera rig from his home in Las Vegas. The food footage was shot by a food photographer in suburban New York. And we watched everything over Zoom.

But I’d say the biggest difference is that at another time, we would have been all over live sports programming, and that doesn’t exist right now. We had to think of a whole new way to look at our media to reach people.

This conversation has been edited and condensed.