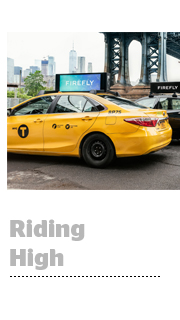 On Thursday, the San Francisco-based startup, which places digital ad displays on the top of private rideshare vehicles and taxis and then splits the revenue with drivers, announced its expansion into New York City, the acquisition of digital ad company Strong Outdoor and $30 million in Series A funding.

The round, led by Google Ventures with participation from existing investor NFX, comes just six months after Firefly came out of stealth in December 2018 with $21.5 in seed cash.

Firefly’s plan is to enter several new US cities this year and hire like crazy across all roles, from engineering, data science and operations to marketing, sales and finance, doubling headcount from 100 over the next two to three quarters.

But New York City will keep Firefly busy for the foreseeable future. Along with its acquisition of Strong, which controls roughly half of the taxi-top inventory in the NYC market, Firefly now owns its contract with the Metropolitan Taxicab Board of Trade to advertise on top of more than 3,200 cabs. Firefly is in the process of adding its own smart display hardware and proprietary operating system – “think of it like a big internet-connected smartphone,” Gunay said – to the top of Strong-affiliated vehicles.

The digital out-of-home opportunity is ripe. Outdoor media is growing, up 16% in 2018 to $5.7 billion, according to Magna’s most recent global ad spend forecast.

Firefly woos gig economy drivers with the chance to boost their income by 15% and attracts advertisers with the promise of reach extension and, more importantly, measurement. The majority of Firefly’s engineering team, which comprises around half of the entire company, is focused on solving for attribution, and it’ll continue to be a big investment area, Gunay said.

Today, Firefly approaches measurement by comparing exposed groups to a control to assess outcomes, whether that be foot traffic to a store or an increase in mobile site visits. The idea is to try and make the interface as simple as possible for the advertiser along the lines of a Google Analytics for digital outdoor.

One advertiser, corporate credit card startup Brex, found that people exposed to a Firefly ad were twice as likely to visit its site than those who didn’t see one.

For now, Firefly’s media is available through an ad network setup via a managed service. But the company is considering a self-service option, and it’s set to execute its first programmatic media buy in June through integrations with Rubicon and several other supply-side and demand-side platforms, Gunay said.

“We’re pushing really hard on the programmatic front,” he said. “Open RTB as it exists online just doesn’t exist in outdoor, in part because of the way the creative needs to be approved and because advertisers need more controls.”

Beyond digital advertising, Firefly is working with local municipal governments in the cities where it operates to provide free urban data, including air quality data to the Coalition for Clean Air. Firefly also donates 10% of its inventory to non-profits and government organizations.

But what do Uber, Lyft and other rideshare companies think of drivers installing advertising displays on their car roofs?

“I can’t speak for those companies, but I can tell you that our incentives are aligned to make sure that drivers have the best experience possible,” Gunay said. “There’s a lot of concern right now over whether drivers can make enough income, and our platform is a way to make this viable and sustainable for them.”