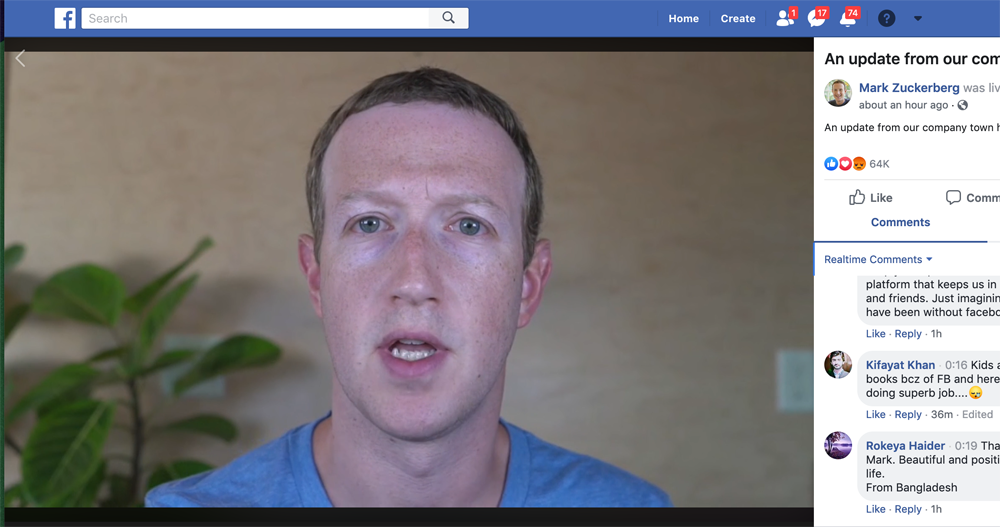 On Friday, Zuck went live on his Facebook page to outline how Facebook is preparing for the 2020 presidential election, cracking down on voter suppression and trying to regulate hate speech on its platform.

Facebook has been getting hammered over the last few weeks (months, years … ) for repeated failures to effectively moderate toxic content in organic posts and paid ads.

Amid the protests following the killing of George Floyd in May, a small but growing number of advertisers are now using the only lever they have to effect change on Facebook: their wallets.

In addition to Unilever, which says will stop advertising on Facebook, Instagram and Twitter for the rest of the year, Honda, Verizon, REI, Ben & Jerry’s, The North Face, Patagonia and Eddie Bauer have all pledged to suspend their ad spend on Facebook for the month of July as part of a “Stop Hate for Profit” campaign launched by Color of Change, the Anti-Defamation League, the NAACP and other civil rights groups.

Rakuten-owned messaging app Viber is going even further with a pledge to stop all advertising on Facebook and Instagram until the company fully addresses its misinformation and hate speech problems.

Nearly 100 brands have joined the boycott so far. Facebook, of course, works with more than 8 million paying advertisers, a number mostly made up of small and medium-sized businesses.

Facebook has responded to criticism through various mouthpieces, including VP of global marketing solutions Carolyn Everson, by saying it wants to be a “force for good.” Zuckerberg repeated the same words Friday during his livestream.

But it’s action rather than promises that advertisers and civil rights organizations are looking for right now.

“We acknowledge the efforts of our partners, but there is much more to be done, especially in the areas of divisiveness and hate speech during this polarized election period in the US,” Luis Di Como, Unilever’s EVP of global media, told The Wall Street Journal Friday, in reference the CPG giant’s decision to halt advertising on Facebook, et al.

In response, Facebook is tightening its policies to better deal with hate speech in ads, even if they come from politicians.

Facebook will block ads that claim people of a certain race, ethnicity, national origin, gender, sexual orientation or immigration status are a threat to the physical health or safety of anyone else.

Zuckerberg said that Facebook will also seek to better protect immigrants, migrants, refugees and asylum seekers from ads that suggest they are somehow inferior or direct contempt, dismissal or disgust at them.

Facebook will also start to label content that it decides to leave up despite the fact that it’s problematic or incendiary. There are certain cases in which Facebook won’t take this type of content down if it also deems the posts to be newsworthy in some way. Although people will still be able to share this content in order to condemn it, Facebook will add a prompt telling them that what they’re sharing may also violate Facebook’s policies.

“To clarify one point: There is no newsworthiness exemption to content that incites violence or suppresses voting,” Zuckerberg said. “Even if a politician or government official says it, if we determine that content may lead to violence or deprive people of their right to vote, we will take that content down.”

Which begs the question of what would have happened with President Trump’s now-infamous “when the looting starts, the shooting starts” post if these policies had been in place in May.

“I’m optimistic that we can make progress on public health and racial justice while maintaining our democratic traditions around free expression and voting,” Zuckerberg said in closing out the public portion of his stream before heading into a company-only town hall meeting.