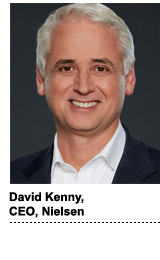 Nielsen’s been through the wringer this year.

After underreporting local TV viewing during the pandemic, long-standing frustrations in the television industry hit a boiling point and interest in alternative measurement currencies began to peak.

In September, after the Video Advertising Bureau rattled its saber and formally called for Nielsen’s Media Rating Council accreditation to be revoked, the MRC followed through. Nielsen lost its MRC seal for its local and national TV measurement ratings.

But Nielsen is working with MRC auditors on a daily basis to regain its accreditation and plowing ahead with Nielsen One, its cross-platform measurement solution. According to David Kenny, Nielsen’s CEO and this week’s guest on AdExchanger Talks, One is still on track for a Q4 2022 release.

“There needs to be cross-media measurement,” Kenny says. “It’s going to be really hard for the industry to manage yield if you’ve got a lot of competing metrics.”

Still, Nielsen’s recent struggles have been like catnip to alternative measurement providers, and broadcasters are giving them a shot. In August, NBCU issued an RFP to more than 50 measurement companies seeking alternative approaches to cross-platform metrics. In September, ViacomCBS announced that it will use VideoAmp as a currency for linear TV planning and measurement.

Also in this episode: A detailed update on Nielsen One, the pros and cons of using big data for TV audience measurement, Nielsen’s recent rebrand and why it’s sometimes better not to listen to your high school guidance counselor.