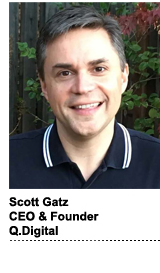 Way back in 2019, Gatz wrote a provocative column for AdExchanger with the headline, “Marketers, Do You Know What’s On Your Block Lists?”

Unfortunately, the answer to that question is still … no.

“I really wish I could say it was different, but we’re still seeing blocklists that are clearly generated at some higher level within an agency that are just words that might be troublesome one day,” Gatz says on this week’s episode of AdExchanger Talks.

Publishers in the LGBTQ community are often penalized because their content commonly includes words such as “lesbian” or “transgender” that advertisers reflexively add to their blocklists.

It’s an innately unfair setup, but many other publishers experience similar issues. Gatz recently spoke to a publisher that covers politics, and the number-one word that pub sees on media buyer blocklists is, you guessed it, “politics.”

And so Gatz has a message for advertisers: “I understand in the Wild West of programmatic how you might want to do these things, but you’ll never reach your community, and especially with direct buys,” he says. “[These lists] are blocking you from engaged consumers … I dare you to ask a marketer what’s on their list – I bet they don’t know.”

Also in this episode: What it was like to found a media company during the 2008 economic downturn, what advertisers can do to effectively – and authentically – reach niche audiences and Q.Digital’s struggles to make Google AMP work for its business in light of the recently unsealed antitrust lawsuit into Google’s ad tech stack.