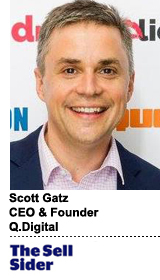 Today's column is written by Scott Gatz, CEO and founder at Q.Digital.

It was the first day of LGBTQ Pride Month and a major brand advertiser was sponsoring our Pride coverage, running creative with diverse LGBTQ representation.

It was a perfectly executed campaign we were sure would resonate with our audience, except for one problem: People would never see it. The agency’s block list included the keywords “lesbian,” “bisexual,” “transgender” and “queer.”

As an LGBTQ publisher, we’ve seen this many times, which is why we prefer monitoring over blocking. The media buying team was extremely surprised and embarrassed, and the block list quickly edited. Had this been a programmatic buy, it likely would have gone unnoticed.

This raises an easily overlooked yet essential question for all buying teams and marketers: Do you know what’s on your block lists?

But it’s not just LGBTQ content that is unnecessarily blocked. Some sports sites, for example, lost revenue during the recent NFL Draft. The University of Notre Dame had several prospects, but some buyers added “Notre Dame” to their block lists the week before because of the fire at the famous Parisian cathedral.

A health information publisher I know commonly sees “drugs” and “oral” (as in “taken orally”) on the block lists of pharma companies. That makes it kind of hard to advertise effective drug therapies without those terms.

And up to 65% of entertainment coverage gets snagged by block lists, according to Cheq – watch out for celeb photo “shoots” and reviews of “Killing Eve,” “The Walking Dead” or “The Crimes of Grindelwald.”

Block lists are often created by a team far away from the day-to-day media buying team. In a vacuum, the lists might make sense – better safe than sorry. But in context, the blunt use of a list might even be in direct opposition to a buyer’s campaign tactics. These lists may do more harm than good: decreasing campaign reach on safe and popular content, limiting opportunities for contextual alignment with the campaign, decreasing funding for journalism and shutting out multicultural voices reliant on ad revenue.

Publishers don’t want to see a client’s ads next to unwanted content. As we move from cookie-based to contextual targeting, it is essential that teams ensure that their ads are actually showing up on the most relevant content. Ad tech and artificial intelligence will help this in the coming years, but in the meantime, buyers can succeed the old-fashioned way: with the human touch.

They need to know what’s on their block lists, check it and share it with publishing partners.

Of course, for direct buys, most publishers have seen all this before. If buyers tell publishers what they want to avoid, publishers will help maintain brand standards while not missing out on valuable audiences.

By knowing what’s on their block lists, agency buyers keep their clients safe and get the most out of their media dollars, all while ensuring that publishers are able to maintain the level of quality content that drove buyers to partner with them in the first place.