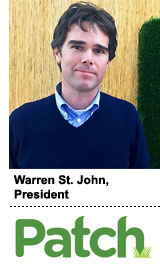 For many communities, the math doesn’t work anymore for ad-supported local news.

For Patch, the dearth of local content presents an opportunity to quench the thirst for local news in underserved communities – but with an economically viable business model.

When owned by AOL, Patch struggled to make its hyperlocal model work economically, just like the print versions of local news around it. But after being purchased by a private equity firm in 2014, Patch revamped its model and is entering its fourth year of profitability while publishing in 1,227 communities.

A key reason: Patch is leaning on tech to make both content creation and advertising as efficient as possible.

Patch created a self-serve advertising portal. Over the past year, it grew 110%, making it the fastest-growing part of the business. For $1 a day, people can promote events outside their community. The Stripe platform handles the payments.

The average advertising order is just $48, but highly profitable. Patch doesn’t need to pay ad tech fees for the in-house portal, making these paid postings the highest-margin part of its business. Plus, the native-style calendar posts resonate with readers, who are interested in the local charity car wash or seminar near them.

Beyond self-serve advertising, Patch emphasizes automation across the rest of its ad offerings. Display ads are often executed programmatically. National partnerships with companies like Realtor.com rely on automation to pull in relevant local listings for each Patch site.

Patch is also looking at three different ways it can make content creation better and cheaper.

Traditionally, local editors write and curate content for a community. Patch is experimenting with using artificial intelligence (AI) to write the “commoditized content we don’t want trained reporters to do,” such as descriptions for the weather report, similar to how the Associated Press creates automated coverage of earnings reports and sports games.

AI will also take on some of the grunt work of content creation. Content feeds can pull in town hall meeting minutes, for example, in a way that’s already organized and cleaned up by AI. Then an editor can pull out the most important information, call a source to round out the article, and publish faster and more efficiently than in the past.

Patch is also delving into user-generated content, a nod to the popularity of competitor Nextdoor. “Neighbor posts” offer a forum for residents, and readers can also create articles themselves though a revamped content management system that makes it easier to post stories on their own.

But moderation of community-generated content is “aggressive,” St. John said.

“Unlike platforms in Silicon Valley that wash their hands of responsibility, we want to host a local conversation that we can be proud of and that we ourselves would want to be part of,” he said.

And St. John is of the opinion that a hyperlocal platform that’s purely user-generated just doesn’t provide enough engaging content. Besides NextDoor, most hyperlocal alternatives, such as crime-reporting app Citizen and local Facebook parents groups, rely on users to post useful content, with uneven success.

“You run out of people to aggregate from if you are not willing to create content yourself,” St. John said.

But Patch can create content to serve a community in addition to giving them a forum to talk to their neighbors.

Patch has long syndicated and distributed its content onto other platforms, from MSN to Amazon Alexa, Flipboard and Apple News. But now it’s becoming a distributor of content itself.

This year, it started distributing content from nonprofit journalism sources like ProPublica and CalMatters. They receive a generous revenue share of the advertising that runs against their content and a way to introduce their investigative journalism to more people. Patch, in return, can be more of a resource to their readers with this investigative content.

In concert with this project, St. John has been thinking more about the value of his content. Will platforms eventually be willing to pay for access? He thinks the tide is turning.

“We are posting 1,000 original articles a day on our platform,” he said. “It’s extremely valuable, super-high engagement stuff. And if you’ve talked to the platforms, it’s not a secret that when you put local news and information in front of users to whom it’s relevant, they click at a high rate.”