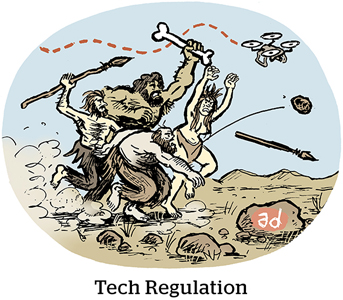 Google “cavalierly” claimed the review was justified but had no justification to support its claim, even under liberal good faith standards, writes Magistrate Judge Susan van Keulen. Google must turn over every document and demonstrate to the court why it shouldn’t be sanctioned and forced to cover its opponents’ legal fees stemming from the motion (h/t @jason kint).

Facebook was fined $70 million last October by the UK Competition and Markets Authority, not for an antitrust violation but because it routinely ignored the regulator and stopped sending information on acquisitions as mandated by previous enforcement.

Apple took a nominal $5.5 million fine from the Dutch regulator in January after it failed to satisfy a court ruling that developers can use outside payment services. When Apple did release Netherlands-specific App Store policies, they were so onerous no developer would comply.

A similar ruling in California last November, calling for Apple to allow developers to communicate to users they can subscribe via the web, was also greeted by relentless bad faith.

One App To Rule Them All

When the two companies become one in Q2, their respective signature streaming apps – Discovery Plus and HBO Max – will be rolled into a single service rather than a bundled offering, Variety reports.

The package deal raises questions about pricing. But although Discovery CFO Gunnar Wiedenfels didn’t disclose how much consumers will have to pay for the combined platform, he did note there will be an ad-free and an ad-lite tier.

But a combined product offering makes sense because Warner Bros. Discovery has its eyes on an international, direct-to-consumer strategy.

Wiedenfels, who will remain CFO of the new company, said during a conference call on Monday that while some countries have as little as 15% to 20% of households with pay TV, a subscription-based DTC plan will allow the company to reach “the entire population,” including mobile viewers.

The FTC has struggled over the years to land meaningful blows against online advertising and technology companies. One reason is because the only US advertising and privacy-related laws with teeth are the ones that apply if a company targets or markets to children.

One tactic the agency has turned to lately is “algorithmic destruction,” Protocol reports.

Earlier this month, the FTC ordered WW International (formerly Weight Watchers) to get rid of all AI models or algorithms that incorporated data from the healthy-eating app Kurbo, which had collected data, including from children (that’s how they getcha!), without proper consent, aka parental consent.

But the first case of algorithmic destruction was a real biggie: Cambridge Analytica and Facebook. Cambridge was forced to delete all the models assembled using Facebook info.

Fines are all well and good, but the FTC can’t levy a fine big enough to dent Google, Apple, Amazon, Microsoft or Facebook.

“This innovative enforcement approach should send a clear message to companies engaging in illicit data collection in order to train AI models: Not worth it,” FTC Commissioner Rebecca Slaughter wrote in a Yale Journal of Law and Technology article published last year.

Dozens of BuzzFeed employees accuse the company of shortchanging them during the “bungled” IPO process. [NYT]

BOK is back and his pitch is for “buyers to make emissions part of their spending decisions.” [Digiday]

Meta faces yet another lawsuit for EU data breaches in 2018. [TechCrunch]

Goodway Group has made Laurel Collins its new VP of media planning. [release]