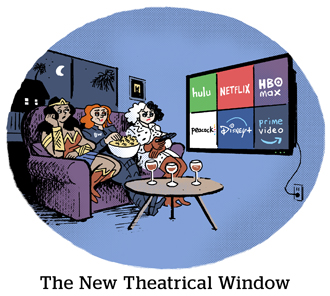 Disney confirmed it will launch an ad-supported tier of Disney Plus, following in the footsteps of other studios, including previously ad-free legends like HBO that now sell ads.

CTV remains unchartered waters. But that’s also just the nature of the beast, according to a Substack by Mike Shields.

Subscriptions are the golden metric, but broadcasters still need to meet campaign guarantees. The “hybrid” or multi-price-point strategies favored by most traditional entertainment studios are a matter of testing to see which will work while balancing the need to make money and produce content now against potential long-term gains. Investors are increasingly unimpressed.

The transition to streaming media is particularly difficult for linear TV companies, which go from 20 minutes of commercial breaks per hour to small pockets of valuable inventory, which are often parceled yet again to auction-based ad channels and the streaming platforms.

“Netflix wrecked everyone’s ad tolerance,” Shields writes. “How do you shove a $70 billion market into those five minutes, let alone grow the market?”

The Price Of Performance

There are mundane reasons for why this is happening, like skewed year-over-year comparisons to 2020, for instance. But there are also idiosyncrasies in the way performance advertisers structure campaigns that need to be considered.

What advertisers will pay for a conversion – a sale, a qualified lead, an app download, etc. – hasn’t dropped. Rather, targeting specific individuals has been replaced with targeting broad categories or cohorts.

There’s more demand, but it’s because there are fewer and fewer conversions. Performance marketers must buy more and more impressions to hit their goals.

The new iOS arithmetic says if cost per action goes up because of less targeting efficiency, so do CPMs. Another way to look at it: Apple’s dominance goes up, and conversions go down.

When Ship Hits The Fan

Veeqo, based in Wales, is a relatively inexpensive addition with 60 employees. But it could prove useful to help Amazon scale up on two fronts.

For one, Veeqo plugs third-party Amazon sellers into third-party shipping and logistics services. With that first-party visibility into FedEx, UPS and Shopify’s fulfillment service, Veeqo could channel more third-party sellers through the Amazon warehouse instead.

Second, many Veeqo customers are invested in other commerce platforms (Shopify, Etsy, eBay, Walmart and Instacart, to name a few).

Amazon already has a multichannel fulfillment offering to deliver products sold on other online stores, according to CNBC, and the Amazon DSP can be used by marketers that don’t sell on Amazon – or don’t sell physical products at all, such as insurance.

But if Amazon is going to dominate commerce, it needs more leverage across other major media and commerce companies. Not all sales will happen on Amazon, but Amazon still wants to drive those purchases. Or, at the very least, to have the data to claim credit for sales that occur elsewhere.

NBCUniversal has ended its partnership with Hulu. [Adweek]

Meta is testing programs for paying out bonuses to content creators. [Insider]

With the war in Ukraine, TikTok faces its own disinformation challenges. [Digiday]

Why AWS makes money and Google Cloud does not. [The Information]